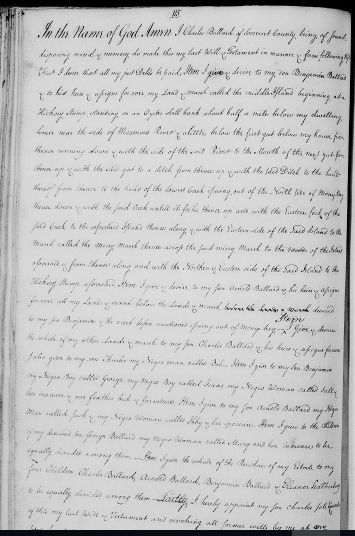 The original Maryland settler, Charles Ballard, is referenced several times in Old Somerset on the Eastern Shore of Maryland: a Study in Foundations and Founders.[1] Ordering the references chronologically revealed the following information.

Summarizing the information from Old Somerset, it was determined that the original settler, Charles Ballard, came to Somerset County, Maryland, about 1666. He settled in the Hundred of Manokin, shown on the following map. Charles received 100 acres of land as an enticement to settle, 50 acres for himself and 50 acres for William Johnson. About 1665, Charles married the widow, Sarah Elzey, and they had five children: Henry, Sarah, Charles, Elizabeth, and Jarvis.

Searching FamilySearch Family Tree for Charles Ballard, original settler, he was located with a marriage to a Sarah Nutter.[2] No documentation is given for the surname and the sources attached to the couple are birth records for Henry 1666 and Sarah Ballard 1668. Old Somerset gave no maiden name for Sarah. Without documentation, this maiden name appeared dubious and was not added to the client database.

The five children mentioned in Old Somerset are noted on the FamilySearch Family Tree details page for Charles Ballard and have been added to the client database. Charles Ballard died by 1682, when an inventory for his estate is on record at the Maryland State Archives.[3] His widow, married a fourth time to Stephen Luffe, as noted in Old Somerset.

The children of Charles Ballard married and also resided in Somerset County. Future research could verify each of the marriages and descendants. Two of the sons, Charles and Jarvis, and their descendants are found on the tax lists of the county from 1723-1759, helping to discover family groups. Only a handful of wills are found in the records, but combined with the tax records, future research can make connections with the various descendants.

The will names Charles’ wife as Eleanor and his brother-in-law as Robert King, providing evidence of his wife’s maiden name as King. Old Somerset agrees with this assumption, adding further information that Eleanor King was the daughter of Robert King I of “Kingsland,” Somerset County. [5] Further research could learn more about Robert King and his family.

Tax lists of Somerset County, Maryland, reveal more about the family of Charles Ballard as well as that of his brothers. The lists are mostly complete for almost 40 years, giving excellent coverage for the households. The poll tax was levied on free males over the age of fifteen and slaves of both sexes over fifteen. The lists are abstracted with a household number assigned to each individual and the Hundred where the individual resided.

The Maryland State Archives probate index reveals inventories and accounts for the probate of Henry Ballard, dated 1697.[7] With evidence of the death of Henry Ballard, son of settler Charles, the Henry of the 1723 tax listing would be the next generation of Ballards.

Important clues to identifying the Ballard individuals are the naming of the slaves in the tax records. The tax applied only to slaves age fifteen and over, which are listed in parentheses, so not all the slaves of a household were listed. Men who are over the age of fifteen but not the head of household were listed as dependent. The Maryland State Archives hosts the transcription of the tax lists and explains, that although the lists are fairly complete, some pages are missing and illegible.

The 1724 will of Charles Ballard bequeathed his land in Manokin to his son Henry and his land in Wicomico to his son Charles.[8] The tax listing shows a Charles being taxed in both locations, with a son as dependent in each household. The locations correspond to the land bequeathed in the will: Charles – Wicomico; Henry – Manokin.

The 1724 will also bequeathed several slaves to Charles’ children: Ventor, Cyrus, Sarah, Ceasar, Rowand, Candice, Betty, Moll, Sabrinah, Witt, Betty, Pugg, Marriah, Jack, Will, and Hugo. Several of these slaves were not yet fifteen and would not have been taxed. Also, the tax was not levied on any slaves infirm or unable any longer to work. Comparing the slaves from the 1724 will of Charles Ballard to the slaves listed in both the Wicomico and the Manokin location, it is evident that these are likely all slaves belonging to Charles Ballard of the 1724 will. The two tax listings are for one man, Charles Ballard, head, with the slaves mentioned in the will in bold.

Charles Ballard (2), son of settler Charles (1), and father of Charles (3) died by 1725 when his inventories and account records are on record on the Maryland State Archives index.[9] His widow, Eleanor (King) Ballard, first appears on the tax lists in 1728, as a head of household in Wicomico. The slaves in her household match those bequeathed her in the 1724 will of her husband, Charles Ballard: Witt, Betty, Putt, Marriah, Jack, Will, Hugo. She is present on the tax lists until 1737 when she presumably died.[10] No probate records are on file for her at the Maryland State Archives.[11]

The 1728 tax list clearly identifies Henry Ballard of Manokin as the son of Charles (2) Ballard and brother of Charles (3) by the slaves left to him in his father’s will: Ventor, Cyrus, Sarah, and Hugo (after widow’s decease).[12] It appears that although Eleanor was still alive in 1728, the slave Hugo had already gone to Henry.

The identity of a second Eleanor Ballard of Manokin is unknown. Future research could discover the other Ballard descendants. See Appendix A for a list of the Ballard individuals from 1728-1759. This tax listing will be very helpful for future research determining additional family relationships.

As discussed previously, the tax lists for Somerset County, Maryland, are mostly complete for almost 40 years, giving excellent coverage for the households from 1728-1759. The poll tax was levied on free males over the age of fifteen and slaves of both sexes over fifteen. When a young man reached the age of fifteen, he would be included in the tax for that household. The lists are abstracted with a household number assigned to each individual and the Hundred where the individual resided.

Charles Ballard (3) first appears in the tax lists of 1723 in the household of Charles Ballard (2) of Wicomico. From 1723-1759 Charles (3) is consistently listed residing in the Wicomico Hundred, presumably on the land bequeathed to him by his father, Charles (2). No marriage record has been found for him, but he likely married by 1730. A John Ballard is first listed in his household in 1745 as a dependent.[13] This is likely his oldest son, born about 1730.

By the 1745 tax list, the Manokin Ballard descendants had increased as shown on the tax list. Henry, the brother of Charles Ballard (3), consistently had several men listed as dependents in his household – likely apprentices. The 1724 and 1725 tax lists both give his occupation as “corroner.” It seems he needed from three to four employees to carry out his trade.

Future research could sort out the various Ballard descendants who resided in the Manokin Hundred.

The last tax list in the series, 1759, reveals more of the sons of Charles Ballard: Charles and Arnold, both appearing as dependents in the household of Captain Charles Ballard.[14] These sons were likely born about 1738 and 1740 since they would have to be fifteen years of age to appear on the tax list.

Charles’ will of 1790 reveals the names of his children: sons, Benjamin, Charles, Arnold, deceased son George, and daughter Eleanor Leatherbury.[15] It appears son John had preceded his father in death so he was not named in the will. Benjamin and George had probably not reached fifteen by 1759 so were not listed in the tax list. Charles and Arnold are consistent with the tax list and the will.

The 1790 census could give a listing of the Ballard heads of household in Somerset County, but all census returns for Somerset are lost. As a substitute, the Maryland State Archives has compiled a list of the 1783 property owners of the county.[16] This list is very beneficial stating not only the names of the men, but the “hundred” where they owned land and likely lived. The term hundred came from the British medieval land division. In time of war, each hundred was to produce 100 fighting men. English settlers carried the term into the new world and the land in colonial America was often divided into “hundreds” which were used for administrative purposes and geographical subdivisions.

The first page of each district states that the return was “agreeable to the Act of Assembly to raise supplies for the year 1783.” The Revolutionary War was ending in 1783 and a taxpayer on this list is evidence that he provided patriotic service for the new country. The 1783 tax list illustrates the various Ballard property owners that appeared in Monye, Wicomico, Nanticoke, Annamessex, and Manokin Hundreds. Further research in the land records could determine which branch of the family each individual belongs to.

By this point in the research, time had expired. Although complicated, the session was very successful with discovering the generational links. The ancestor, Charles Ballard (3), was found to be the son of Charles Ballard (2) and grandson of the original settler Charles Ballard (1).

The table for the 1723-1759 tax listings of Somerset County, Maryland, will be very useful for future research in determining the various Ballard descendants and their relationships.

Many new ancestors were added to the client database and can be added to FamilySearch Family Tree.

It has been a pleasure to assist you in researching your ancestry. We look forward to continuing, according to your instructions.