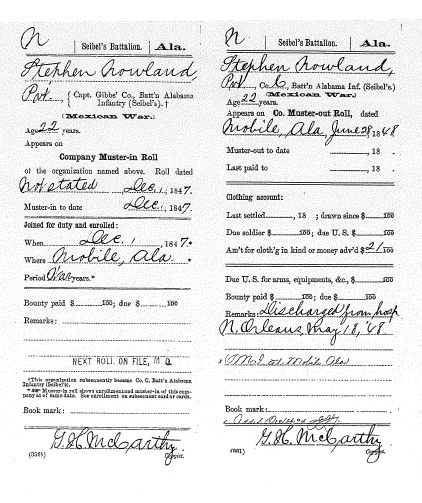 A time line has been prepared which will help refresh the facts learned thus far in regards to Littleton Nowlen.

As was mentioned in the time line, Stephen Nowland enlisted in the military to fight in the War with Mexico at the same time as Littleton in 1847.  They were both in Seibel’s Battalion, Alabama Infantry.  The military records for Stephen were requested from the National Archives and received.[1] Stephen’s record claimed he was of the age 22, placing his birth about 1825.  This strengthens the position of the possibility that Stephen was a brother to Littleton who was born in 1826.  Another record was found at the archives involving a land warrant.  This should be investigated further as more information comes to light regarding Stephen, born about 1825.

The recommendations of the last report included a search of the Wayne County, Tennessee and Marengo County, Alabama tax, land and probate records.  The next step in this project was to search these records along with those of Williamson County, Tennessee, as needed.   Williamson County was chosen because of the connection with the Nowlens in Wayne County and because an older Littleton Nolen was found in this county.

Since Littleton claimed he was born in Wayne County, Tennessee, the search began in this county.  Tax records needed for the time period were not available on microfilm at the Family History Library.  Wills for the years 1817 – 1847 were destroyed during a courthouse fire in 1973.  Records for 1848 – 1890 were searched, but no Nowlen names were found.

Land records are available for Wayne County.  In the “North Carolina and Tennessee, Early Land Records, 1753-1931” an entry was found for David Nolin dated 7 January 1822. [2]  The land was originally granted to Samuel Nicholson 1 August 1805 by the Register of East Tennessee but then granted to David Nolin, assignee of the said Samuel Nicholson. The land contained forty acres lying in the eighth district in Wayne County on the head of Little Rock House Creek in Range seven and section three.

The book “Abstracts of Deed Records” produced the following entries for the surname Nolen:[3]

The land records showed the presence of David, Joseph, Berry, Anslum and Stephen Nolen/Nowlen.  In the last research session, it was suggested that Stephen, Joseph and Anslum were the most likely candidates for father of Littleton since they were the only Nolen/Nowlands listed on the census surrounding the year of Littleton’s birth in 1826.  The land records corroborated the presence of Joseph and Anslum at the right time in Wayne County.   David Nolin bought land in 1822 which was sold by Joseph Nolen, and Anslum bought land in 1820. Joseph sold his land in 1831 and Anslum sold his in 1835, indicating they were living in Wayne County during the time of Littleton’s birth in 1826.  Stephen was on the 1820 census and then not mentioned in the land records until 1832 when land was conveyed to heirs of James Cooper, who was the father of Stephen’s wife, Nancy.  Berry Nolen was not found on a census and his land transactions began after the birth of Littleton Nowlen.

Anslum, Joseph and Stephen Nowlen/Nolen are proposed as possible candidates for the father of Littleton and further research was conducted to learn more about each man.  The following summaries for each of the candidates will include information already found as well as new documentation.

It appears the family of Anslum and Elizabeth who moved to Mississippi and Arkansas was the same as the family who lived in Wayne County in 1830.  This couple did not have a son named Littleton.

At this point Joseph is still a candidate for father of Littleton, but without a will or other land records to show a relationship, it is difficult to make any connections.  There is also the question of the fact he only had one son of the age to be Littleton on the 1830 census and yet there is the likelihood that Littleton had a brother, close in age, named Stephen.

Jacob Braswell and Judith his wife of the County of Marengo

This is excellent documentation connecting Littleton to his father, Stephen, and to the Stephen who was previously suspected to be his brother.  Because of the lack of time left on this project only a brief search was made for the other children to learn their dates and places of birth. Further research is recommended to learn more about them and their descendants.

The 1850 census for Marengo County produced David Nowlen, born about 1829 in Tennessee and Elizabeth Nowlen, born about 1834 in Alabama. [20] David was in the household of Edwin Lockhart and Elizabeth was in the household of John and Lydia Smith.  There was also a William Nowlen in Marengo County, but he was born in Alabama in 1831 which would have placed him as a minor in the estate record, but he was not listed in that category.

Seth and Mary Dabbs appear to have been found on the 1850 and 1860 census of Wayne County, Tennessee.[21] [22] Mary was born about 1818 in Tennessee and they had several children.  However, all the Public Member Trees on Ancestry.com and Family Tree at FamilySearch.org claim Mary’s maiden name was Gander.  Before adding this Mary to the family of Stephen Nowlen, further research should be conducted to ensure this is the same Seth and Mary Dabbs as was named in the estate record.

Stephen Nowlen, the father of Littleton, is likely the same Stephen who was named in the Wayne County, Tennessee land sale of James Cooper which was mentioned earlier in this report.   In this record, the heirs of the deceased James Cooper were named including a daughter Nancy who was married to Stephen Nowlen. his decease in which heirs were named.   John Dabbs and Robert Grinder were witnesses to the land sale.   Note that Stephen’s daughter, Mary, married a Seth Dabbs who wass believed to have lived in Wayne County, Tennessee and that some have attributed Mary’s maiden name as Grinder.  Further research should help shed more light on this situation.

There was a Shadrick Noland, born 1817 in Tennessee, in the household of Joseph and Rebecca of Benton County, Alabama on the 1850 census.[23]  He could be the son of Joseph or perhaps a nephew.  Further research could be conducted on this family to learn if Shadrick was their son, or not.

A marriage was found in Marengo County, Alabama for James Nowlin and Martha A. Moore dated 11 November 1845.[24]  This is possibly James, the son of Stephen.  He was not readily found on the 1850 census, so it is recommended more time is spent on locating him in future records.

A marriage was also found in Marengo County, Alabama for Juda Nowlen and Jacob Braswell on 13 April 1837.[25] By 1850 the couple was found on the census in Bayou Mason, Chicot Arkansas with their children.[26]  Of importance is that Littleton and Stephen Noland were also enumerated in this household.

No information could be found yet for William, Jane, Stacy and Nancy Nowlen.

It has been a pleasure to assist you in researching your ancestors.  We look forward to continuing, according to your instructions.