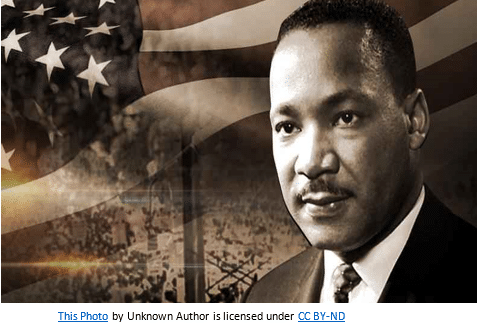 Oh, let us turn our thoughts today
To Martin Luther King
And recognize that there are ties between us
All men and women living on the Earth
Ties of hope and love
Sister and brotherhood

We are bound together by the task
That stands before us
And the road that lies ahead
We are bound, and we are bound.

These opening lyrics to the song Shed a Little Light[1] by James Taylor, a written tribute to Martin Luther King, Jr., becomes a plea to all for us to put aside differences and join in the common “task that stands before us…In our desire to see the world become a place in which our children can grow free and strong…”

On the cusp of February, designated as Black History month, and during the week of Martin Luther King, Jr. Day, it is fitting to examine why and how a Baptist minister and civil rights leader, who advocated for nonviolent resistance against racial segregation, became such an icon in the history of this country.

Many books and articles have been written with accounts of his life, records of his inspiring quotes and lists of his accomplishments against all odds, but from where did he draw his determination, courage and wisdom?

We will offer one reason that could have been factored into his success, and may have contributed to his willingness to press forward with his strong convictions, regardless of the emotional and physical landslide of opposition and persecution he faced throughout his life.

Here is a little bit of history of the ancestry of Martin Luther King Jr.’s maternal family line, starting with his great grandfather:[2]

Willis Williams was a slave on the Williams Plantation in Penfield, Greene County, Georgia, owned by William Nelson Williams. Willis was a slavery era minister, but since he was a slave, he could not actively preach in the church. Willis, his wife, Creecy [Lucretia], and the family of William Nelson, all attended Shiloh Baptist Church in Penfield before the Civil War. An interesting fact is that Shiloh Baptist considered both slaves and whites as members of their church, although there were still separate distinctions between the two groups.

Their son, Adam Daniel Williams was born on January 2, 1863, the day after the effective date of the Emancipation Proclamation. Adam Williams married Jennie C. Parks in October of 1899, and eventually he became pastor of Atlanta's Ebenezer Baptist Church. Among other accomplishments, he was the founder of the Atlanta, Georgia branch of the National Association for the Advancement of Colored People. The couple had one child, Alberta Christine Williams who became the mother of Martin Luther King, Jr.

Martin Luther King, Jr.’s paternal grandfather, a sharecropper in Stockbridge, Henry County, Georgia, was a tenant on a large cotton farm on the outskirts of town. Jim [James] King married Delia Lindsey on 20 August 1895. After a severe infestation of boll-weevil, the farm they worked on was ruined, and Jim King took his family and went to Atlanta.  Their son, Michael King was the eldest son of the nine children.

Growing up in the early part of the twentieth century, [Michael] saw firsthand the brutality of southern racism.  In his early teens, he was beaten by a white mill owner. He also saw a black man hanged by a white mob. Yet his family continued to advocate nonviolence. When his mother was dying, he cursed white people, but his mother disagreed. "Hatred makes nothin' but more hatred...Don't you do it," she told him. As a member of Floyd Chapel Baptist Church, he was inspired by the few ministers who risked speaking out against racial injustice and decided to become a minister himself.[3] 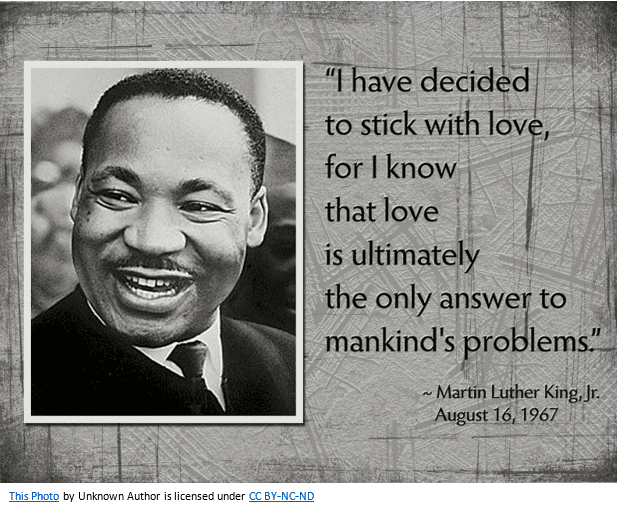 He met his future wife, Alberta Christine Williams while staying with his sister who was boarding at the Williams’ home. In 1926 on Thanksgiving Day, the couple married. At some point before 1930, Michael changed his name and the name of his son to Martin Luther King, Sr. and Jr. This is how the city of Atlanta became the birthplace of Martin Luther King, Jr., who grew up in the heart of a stable black community, with thriving businesses, churches, and private colleges.

Although Martin Luther King, Jr. never experienced economic hardship, he was aware of the humble beginnings of his ancestors. Was this the root of his success?

Some believe that children who have a strong family narrative enjoy better emotional health, have a stronger sense of control over their lives and a higher self-esteem than those who don’t know their family history.[4]

Marshall Duke and Robyn Fivush, professors at Emory University in Atlanta, Georgia, did studies to determine the truth of this phenomenon. The research was spurred by the comments of a veteran clinician with 30 years of experience and practice.

She told them, ‘I can tell which kids I’m working with are most likely to respond to treatment and benefit most from education plans and adjustments. It’s the ones who know about their family history.’ (Duke, Lazarus, & Fivush, 2008 p, 268) She routinely asks children and adolescents a few questions, such as where their parents met or what sorts of jobs their grandparents had and has observed over the years that those who know such information have much stronger positive prognoses and better outcomes. To assess the efficacy of their colleague’s observation, Duke and Fivush developed a more formal, quantitative measure of family knowledge--a selection of 20 questions they called ‘Do You Know?’ scale.[5]

The duo asked 48 families 20 questions about their family history. The results of the study confirmed the clinician’s predictions. When Robyn Fivush shared her “Do You Know” scale[6] (sometimes called “The 20 Questions,”) in Psychology Today, she qualified them with this information:

Please keep in mind that it is not the knowledge of these specific facts that is important – it is the process of families sharing stories about their lives that is important. So, these questions are a way to begin to ask and to tell, and to begin a family tradition of sharing the stories of our lives. [italics added]

The results were that the key to stronger and more resilient families is to actively share the family stories, whatever they may be. If we implement this tradition in our families, who knows how far the practice will positively impact and empower our children and grandchildren?