Census records can be a great source of genealogical information as they often include names, ages, relationships, residence, occupations and places of origin. One difference between United States and German research methodology lies in the use of census records. In stateside research census records are commonly used. This is not the case in German research. This article will explore German census records to help gain a better understanding of them.

In the United States, the first federal census was taken in 1790, as mandated by the new Constitution. By comparison, the first national census in Germany was not taken until 1871, after the unification of Germany into the German Empire. The 1816 census of the kingdom of Prussia is also considered the first for the area of present-day Germany.[1] 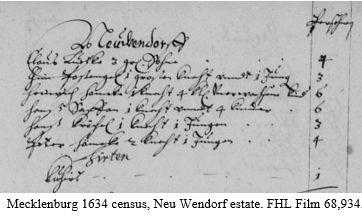 Prior to 1871, censuses in the German region were taken on a local level, such as for a city or district. Some of the earliest German censuses date back to the 1500s. Some censuses were also taken on at a larger level, such as of a kingdom, province or duchy. For example, the duchy of Mecklenburg took several censuses in its various districts in 1633-1634, 1677, and 1689.

Over the years, censuses have been conducted for different reasons. In the United States, the constitutional reason for the census is to use the count to determine representation in the Congress. In Germany, censuses have been taken to gather variable statistical information, depending on the need at the time. A common interest was related to taxation and military service. Censuses taken by member states of the German Customs Union also helped determine an even distribution of the customs union’s income. During World War I, censuses were conducted to assist with food rationing. The 1939 census aimed to gather 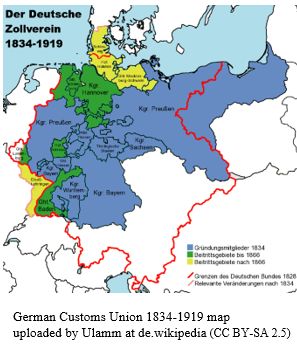 information about Jews and foreigners. After World War II, censuses focused on gathering statistics related to war casualties, refugees, displaced persons and those who were re-settling.

The frequency of census-taking has also changed through time. Unlike the United States, which has conducted a federal census every ten years since 1790, population counts in the German region have varied in frequency and consistency. Beginning in 1816, the kingdom of Prussia took a census every three years through 1867. The German Customs Union adopted the same three-year interval after it was formed in 1834. The census day was on December 3, which had been determined as the day that most people would be home.[2] No census was taken in 1870 due to the Franco-German war. After the initial census in 1871 of the German Empire, additional counts were taken in 1875 and every five years thereafter until 1910. World War I resulted in irregular enumerations, and the financial crises in 1930 caused the count to be postponed until 1933.[3]

Information that might be found in a census record could include name, gender, age or date of birth, place of birth, marital status, occupation, residence, relationship to head of household, religious affiliation, citizenship, whether blind or deaf, or notable physical characteristics. The type of information collected and the forms or format used varied over time and place. 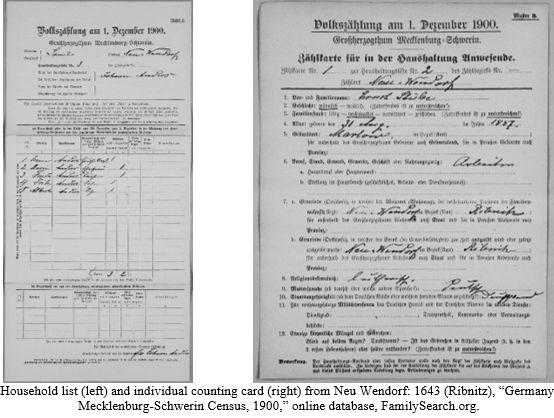 In some areas, often in larger cities, the only surviving documents are the checklists which summarized the information collected with other forms. The checklist (Kontrolliste) below records the residence, house number, indication if uninhabited, name of head of household, and number of male and female individuals in the household. 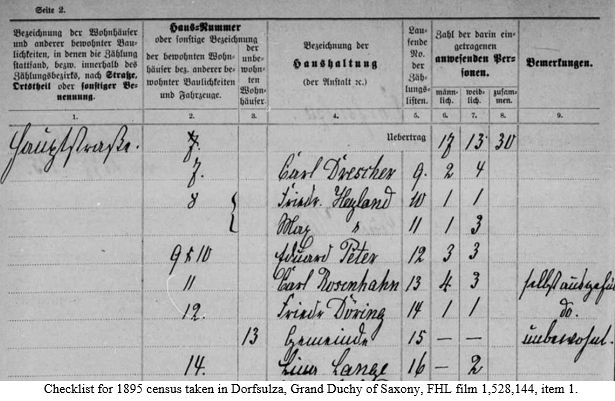 If you cannot find an official census record (Volkszählung), look for the following record types which contain similar information:

A great resource for learning more about German Censuses is Dr. Roger P. Minert’s book, German Census Records, 1816-1916: The When, Where, and How of a Valuable Genealogical Resource, which includes census information about each province.

Some census records can be found online, others have been captured on microfilm, and others may need to be searched for in various state archives. If your ancestors lived in the duchies of Schleswig, Holstein and Lauenburg, the principality of Lübeck, or the grand duchy of Mecklenburg-Schwerin between 1671 and 1864, check out the indexed database Arbeitskreis Volkszahl-Register (working group for population registers) at www.akvz.de.

Understanding the history and geography of Germany in general, and of your ancestral town and area of origin in particular, will help in knowing what records may exist and where to look for them. Skilled researchers at Price Genealogy are also available to help you find your German ancestors.

Have you had to get info from German census records?  Do you have any questions?  Let us know in a comment below!