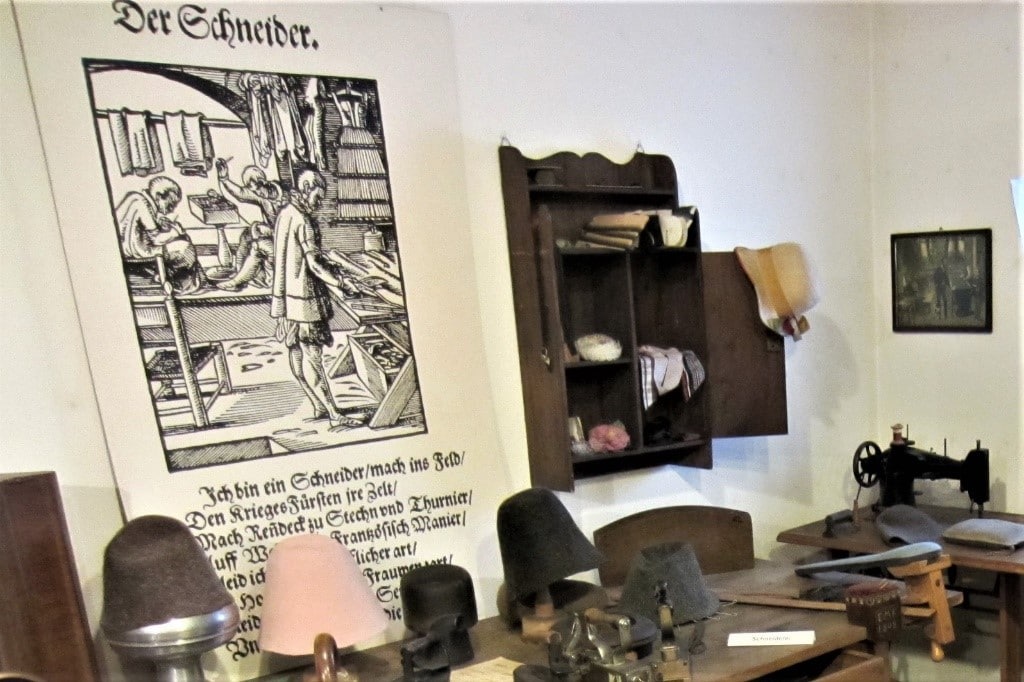 How did you get your name? Were you named after an ancestor? Where did your surname originate from? If you have not already done so, take a moment to write down your answers. This blog post will review some of the German naming customs of your German ancestors.

Children generally received the same name as one of their godparents. Godparents could be friends, work associates, city officials, and family members. In some areas of Germany (and possibly, during certain time periods), a naming pattern for given names may have been used. An example is as follows:

First son received the name of the paternal grandfather.

Second son received the name of the maternal grandfather.

First daughter received the name of the maternal grandmother.

Second daughter received the name of the paternal grandmother.

However, such naming patterns were not consistently or universally followed in all of Germany. 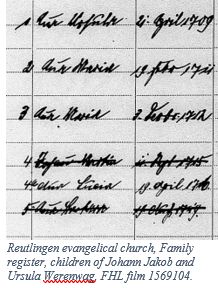 It was common for a child to receive multiple given names. Frequently a common biblical name, such as Johann/Hans, Anna, or Maria, was followed by one or more unique name(s), as seen in the image to the side: Anna Ursula, Anna Maria, Anna Maria, Johann Martin, Anna Lucia, and Anna Barbara. It was not uncommon for multiple sons to be given Johann as their first given name.

Within a family, it is possible for two (or more) children to be given the exact same names, as Anna Maria in the example above. Sometimes, when a child died in infancy, another child born later was given the same name as the deceased child. However, it should not be assumed that the older child always died before the birth of the younger namesake. Sometimes, both children lived to adulthood, so it is best to confirm deaths with a source.

Surnames evolved over time. As the population increased, so did the need to distinguish between individuals with the same name. Initially, a descriptor may have been added to an individuals’ name which was specific to them. The added descriptor may have referred to a certain physical characteristic (such as height, hair color, etc.) or to a town or place of origin (von or from Berlin, from the hills, etc.). These individual descriptors were not passed on to the next generation. Later, these descriptors did eventually turn into hereditary surnames, which were being used in most of Germany by the 1500s.[3]

Surnames may have derived from occupations, geography, and characteristics. Occupation-based surnames commonly end in   ‘-er’ or ‘-mann,’ such as Bauer (farmer), Schneider (tailor) or Zimmermann (carpenter). This category can include the tools of the trade as well, such as Hammer (hammer). Geography-derived surnames can include not only names of villages, but also natural features near a place of residence, such as Baum (tree), Wiese (meadow) or Berg (hill, mountain). Since surnames have been in use for several centuries, one cannot assume that their ancestor with a town-based surname living in the 1800s “recently” originated from the namesake town. Characteristics can include anything descriptive, such as Kurz (short), Krause (curly hair), and Lang (long).

Climb up your family tree and see how many different types of surnames you can identify. What did you learn about your ancestors? On my climb I came across the following:

In northern Germany, especially Ostfriesland and Schleswig-Holstein, many surnames had a patronymic origin, in which the surname changed with each generation. The father’s given name became the son’s surname with the addition of -en. If the father, named Hans Claussen had a son named Peter, then Peter’s surname would be Hansen. The use of patronymic surnames continued into the early 19th century. The transition to permanent hereditary surnames took several years, and in the case of Schleswig-Holstein, multiple governmental decrees.

Another type of surname, a second surname in a sense, is the “Hofname” (farm name, house name or alias surname) found in certain regions, such as Westfalen, Hannover, parts of the Rhineland and Schlesien. A certain surname was associated with a farm and the resident family was identified by the farm name, even if their inherited surname was different. If a man married into the family and lived on the farm, he took on the farm name. In records, the farm name may have been identified by genannt, vulgo, modo, sive, or alias which preceded it.

Grammar also influences names in Germany. The spelling of surnames can reflect the gender of an individual, as well as a possessive aspect. A surname ending with ‘-in’ usually indicates that the person is a female. To determine whether the ‘-in’ is part of the actual surname or not, look for how the same surname was spelled in other parts of the document, other records, or for other family members. A surname ending in ‘-s’ often indicates possession, such as a parent-child relationship. In the marriage record below, the surnames of the fathers, Köller and Überrhein, both end in ‘-s,’ which indicates a close association with the respective groom and bride. The words Sohn (son) and Tochter (daughter) later in the text clarify the type of relationship. Since the bride Anna Maria is female, an ‘-in’ was added to her surname Überrhein.

Did your family name change at some point in time? Remember to take a moment to record and share your story about your name(s). If you would like help with discovering more about your German ancestors and learning their stories, please contact Price Genealogy.

Do you have any other questions about German naming customs?  Let me know in a comment below!