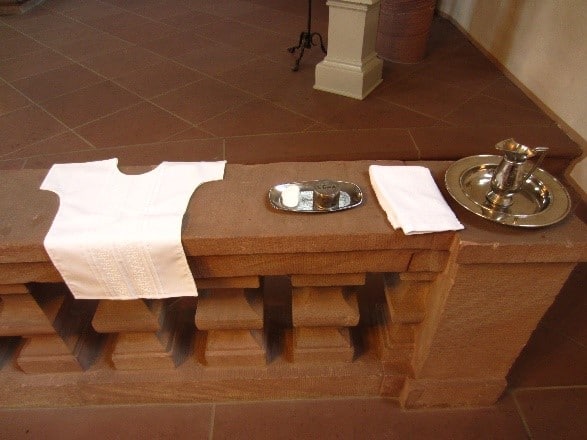 What is the mother’s maiden name? What is the town of origin? When did someone die? How to sort out couples with the same names? What was their life like? Are you wondering how to fill in these blanks with your German genealogy? One source for clues is to look closely at the godparents.

In Germany, infants were usually baptized within the first few days after birth. They may have been carried or accompanied by their godparents to the baptismal font.[1] The godparents’ names were included in the baptismal register.

Godparents were often relatives of the parents, as well as friends. Sometimes they were high ranking personalities in town.[2] The godparent’s name was also a determining factor, since the child usually received the same name as the godparent. Different regions had different naming customs.[3] While it was common for the first couple of sons and daughters to receive the names of their maternal and paternal grandparents, the order in which the grandparents’ names were given varied, as seen below:

Requirements and duties of a godparent

The main duty of a godparent was to assist the parents with the child’s religious development, e.g. by praying for the child and setting an example of a Christian life in word and deed. In earlier times, another duty included taking care of the child if the parents died. In both Catholic and Protestant religions, prospective godparents must be baptized and confirmed members in good standing. Differences included the following:

Until 1983, another difference was that the Catholic church considered the relationship of godparent and godchild an obstacle to marriage.[4]

Research had identified seven children for Johann Georg1 Volz, born 1691 in Seckenheim, Baden. However, his death record stated that he had eight children. The birth registers of the local church did not include an eighth child.

The mystery was solved with help of the baptism record of one of Johann Georg’s1 grandsons, his namesake, Johann Georg2 born 10 September 1754. The godfather, Johann Georg3 Volz was identified as the son of Johann Georg1, as well as the brother of the child’s father, Joseph.

Further research found Johann Georg’s3 death record, which included his age. He was born in 1732. The available record set of the birth register was missing births for the period of 1730-April 1733, which explained why his birth record had not been found.

2) Clues to town of origin and family relationships

Researching godparents can help confirm whether an individual born in one town was the same individual who was married in a different town. A godparent’s town of residence was noted if s/he was not a citizen of the town where the baptism was performed. Noting the surname and name of town of out-of-town godparents can provide clues for possible maiden names and towns of origins.

Death registers were started at a later time period than birth registers. In absence of a death record, finding an individual listed as a godparent can help narrow down the time period of death.

The only vital record found for Catharina Elisabetha Überrhein was her 1706 baptism record. The local parish death register did not begin until 1739. The possibility of her dying as an infant was ruled out when she was found as one of two godparents to her nephew born in 1729. At that time, she was unmarried.

Johann Bastian Überrhein, father of Catharina mentioned above, was the firstborn son. His godparents were one of his aunts, and likely one of his mother’s relatives. Godparents for his siblings appeared to be friends and business associates of his father, a farmer and freight handler. Studying the godparents provide additional insight into his father’s life as a farmer and freight handler. 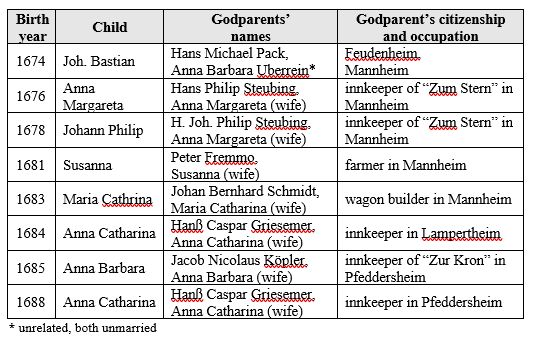 As a farmer, Hans Bastian probably sold produce at the local market. The inn “Zum Stern” was located at the market place in Mannheim. Maybe Hans Bastian met the innkeeper while bringing his farm goods to market. What did he sell? Was it just produce or were there home-produced items as well? He likely used a horse-pulled wagon to supply inns near and far.

If you would like help with your German research and learning more about your family’s story, please contact Price Genealogy. Our skilled researchers can assist you in discovering your heritage.

Are you currently doing any German genealogy work?  Let us know in a comment below!