How to Conduct your French Canadian Genealogy Research (Part One) 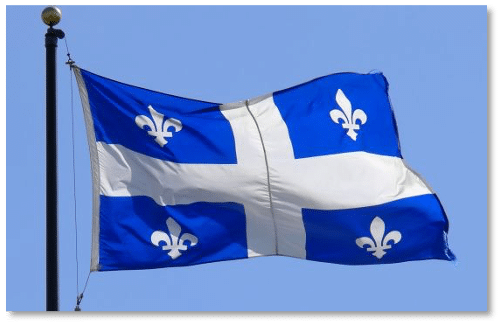 If you have French-Canadian ancestors, there are many avenues for research. The Province of Québec has a rich history and your ancestors are calling you. In the words of a Montréal cab driver, “It is time you come home.”[1] It is time to go back to Québec, become acquainted with the families you descend from, record their lives, love them!

Oh wait, aren’t the records in French? Yes! But, no worries, there are plenty of language helps to get you feeling comfortable reading those old documents. So, let’s get started!

HOW TO GET STARTED ON YOUR FRENCH CANADIAN GENEALOGY RESEARCH

Always start with what is known. Gather information from your family and living relatives. This may include family traditions and oral histories. Compile names, dates of birth and death, marriages, places of residence, and occupations. These are examples of records to seek:

After preliminary research, a good database to search is Généalogie du Québec et d’Amérique française (https://tinyurl.com/t2t7ydd). The site is free, with sources, and is easy to find maternal and paternal lines of an individual. Before 1800 it is very complete, but less so afterward.

Finding the actual name of an ancestor is sometimes one of the most difficult things to do. Tracing your French-Canadian ancestor is especially challenging. To help with this, let’s look at some of these challenges:

In the United States, it was quite common for a woman to take on the name of her husband, making it difficult to know the wife’s identity and familial origins. In Québec, however, a woman generally used her husband’s name in social settings and was always referred to by her maiden name in official documents. This helps when tracing an individual’s maternal line.

A “dit” name is basically a nickname or alias, which is typically added to a surname. The use of “dit” names was in use in France mostly with the military. An individual could also use a “dit” name to differentiate themselves, or their family, from someone else with the same name. A person’s name is built like this:

“Dit” names can often be used to replace the original patronym, so one can find the same person known under a nickname or secondary surname at any time, for no particular reason:

Spellings of surnames were not standardized until very recently. With their silent letters, French surnames especially lend themselves to a wide variety of spellings. When French-Canadian families moved to English-speaking areas, they may have translated their names into English, or modified spelling such as Boivin (drink+wine) into Drinkwine. Keep track of all name variations and spellings you come across. That list might come in handy at some point.

Find your ancestors in every possible census record, 1841-1921. A census is a list of all the inhabitants of Quebec in a certain year. Organized by town and county, it shows entire families as they existed in that year. Most of the censuses from 1792 to 1842 are known as “head of household” enumerations. Quebec was partially enumerated in the Lower Canada census of 1825, 1831, and 1842. Lower Canada then became known as Canada East, and the same southern Quebec areas were included in the 1851 and 1861 censuses of Canada East.

Look for baptisms, marriages, and burials in available church records. The largest religious group in Québec is the Roman Catholic Church. Many Catholic records have been preserved from 1621 to the present. Protestant records are from 1766 when the Church of England (Anglican), their first parish, was founded in Montréal. Other non-Catholic groups came later.

There have been numerous répertoires (indexes) published. Many are indexes of mariage (marriage) records only. A few are indexes of baptême (baptisms), or sépultures (burials), some are all three events.

The Loiselle Québec Marriage Index. (https://tinyurl.com/szyxj4o): Lists more than a million marriages. It includes most of the marriages in all of Québec, from its founding into the 1900s. It can be accessed at the Family History Library and its network Family History Centers.

The Rivest Marriage Index. (https://tinyurl.com/s56gjyj): This index includes over 230,000 marriages. It covers Catholic marriages from 1670 to 1972. It can be accessed at the Family History Library and its network Family History Centers. 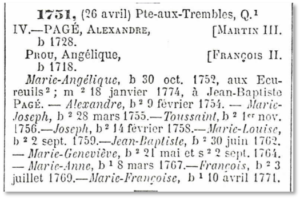 Cyprien Tanguay’s Dictionnaire généalogique des familles canadiennes. This seven-volume dictionary gives the genealogy of most of the French-Canadian colonists and many of their descendants. Records are from the late 1500s to sometimes about 1800 (mostly before 1765). It can be accessed at the Family History Library (https://tinyurl.com/utb9nl3) and its network Family History Centers and through Ancestry (https://tinyurl.com/yx4rpkls).

Programme de recherche en demographie historique (PRDH-IGD)—Université de Montréal (https://www.prdh-igd.com/en/home): PRDH is a directory of vital events (baptisms, marriages, and burials) celebrated by the Catholic church in Quebec and French Canada from 1621 to 1849, as well as a genealogical dictionary of families (Family Reconstructions). You can also put in “nickname/dit name” associations. It provides free searches, but you can access more information with a paid subscription.

Civil registration in Quebec was not started until 1994 and is not a federal jurisdiction. The civil registration of births, marriages, and deaths is a provincial and territorial responsibility. Prior to this, the province required the churches to send copies to the government archives. They are open to anyone. For records after 1900, only the person named in the record or that person’s legal representative can gain access to them.

Bibliothèque et Archives nationales du Québec (https://www.banq.qc.ca/accueil/): This is where you can find the contact information for each of the nine regional offices.

Marriages and Deaths, 1926-1997. (https://tinyurl.com/wwowpjq): This is a detailed index of marriage and death from recorded in Québec, based on the original certificates produced by the Church and contain all religious denominations. The index is accessible with a subscription through Généalogy Québec and available in the Drouin Collection (previously listed).

In Québec, notaires (notaries) have registered contracts since 1626. These include deeds, wills, marriage contracts, and other records that are important in family history research. The persons involved in the contracts received the originals. The notaries kept copies and are of great value.

Québec Notarial Records. (https://tinyurl.com/w77ex7r): FamilySearch has images from the judicial districts of Montréal, Québec, and Terrebonne, 1800-1900 and are available to browse. Images of notarial records are arranged by locality, then notary, then time period.

Québec Notarial Records (Drouin Collection), 1647-1942. https://www.ancestry.com/search/collections/1112/  The entire Drouin Collection contains vital, notarial, and other miscellaneous records from Quebec, as well as French Catholic parish records from Ontario, Acadia, and the U.S. This database only contains the Quebec notarial records.

While most land transfers between individuals were handled by the notaries, land grands, land petitions, and seigneurial records are the exceptions.

While you do not have to be fluent in French, you do need to be able to decipher some French to extract the genealogical information. The following sites can be helpful:

This is part one of a two-part series on French-Canadian genealogy research and serves as a foundation to seeking your ancestors. Part two is a more in-depth listing of resources that can assist you in tracing your French-Canadian roots.

Our professional genealogy researchers at Price Genealogy are available to assist you with your French-Canadian reesearch. Please visit our website at www.pricegen.com. We would love to verify or extend your Quebecois lines.

[1] Patricia Keeney Geyh, “It Is Time You Come Home,” Words of a Montreal cab driver when he discovered his passengers were French-Canadian genealogists from Wisconsin,  1, quoted in French-Canadian Sources (United States: MyFamily.com, Inc., 2002).