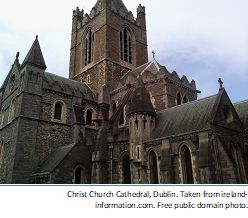 The history of Ireland is inextricably bound to the history of religion in Ireland. Since the 16th century it has particularly been the history of the conflict between peoples of different faiths created and fueled by the government that either supported or repressed them.

Anciently, the island was populated by warring Celtic tribes who were converted from paganism to Christianity, in part by St. Patrick, a Catholic missionary from Rome in the early 5th century, but the new religion became a form of Catholicism with a distinct Irish flavor. In the 12th century a Norman invasion brought the religion more into line with Roman Catholicism and brought much of Ireland under English control (and brought the beginnings of rebellion).

During the 16th century, England switched from Catholicism to Anglicanism under King Henry VIII. During his reign, English control was reinserted over Ireland and attempts were made to force the populace to convert to Anglicanism. Those who opposed English rule used their Catholicism as a symbol of their rebellion.

From 1593 to 1603, during the reign of King James I of England, certain northern Irish Clan Chiefs, from the Province of Ulster, fought a war against English rule which ended with their defeat and flight. Their lands were confiscated and cleared of their Irish inhabitants and the lands were given to corporations and individuals who ‘planted’ them with settlers from England and Scotland. The settlers from Scotland brought their Presbyterian religion with them. Similar ‘plantations’ took place elsewhere in Ireland, but the Ulster Plantation was by far the largest.

Through the 17th and 18th centuries, various ‘Penal’ Laws were passed against Catholics that prohibited them from numerous freedoms such as owning land, holding office, voting, and openly practicing their religion. To almost as great a degree, these same Penal Laws persecuted other non-Anglicans—‘dissenters’—particularly the Scots-Irish Presbyterians.

The Catholic Relief Act of 1791 and the Catholic Emancipation Act of 1829 put an end to legal restrictions on Catholics and also relaxed those on other dissenting religions. As we might imagine, the persecution of a large part of the Irish population, including restrictions on their right to worship as they pleased, affected record keeping.

Naturally, records of the Church of Ireland survive from the earliest date—the early 17th century for parishes in the city of Dublin—but history has not been kind to the records. During the 19th century many Church of Ireland records were sent to the Public Records Office, housed at the Four Courts Building in Dublin, for ‘safe keeping.’ During the Irish Civil War in 1922, Four Courts burned and the records were destroyed. In addition, copies of the registers, known as Bishop’s Transcripts, had been previously destroyed. Approximately two-thirds of the older Church of Ireland parishes have no surviving records. Sadly, no other records can adequately replace lost church records.

For a complete list of what records exist, see a list published by the Church of Ireland at https://www.ireland.anglican.org/cmsfiles/pdf/AboutUs/library/registers/ParishRegisters/PARISHREGISTERS.pdf. For those in the counties of Northern Ireland, also see “Guide to Church Records” at https://www.nidirect.gov.uk/publications/proni-guide-church-records.

Not very many Church of Ireland records have been microfilmed, but in recent years some records have been indexed and are available online. The best websites are RootsIreland.ie and IrishGenealogy.ie. The former is the website of the non-profit Irish Historical Foundation, which helps to support the work of many of the Irish county genealogy centers through the subscriptions it charges to access its indexes. The latter is a free government-sponsored website that provides access to indexes and some images of records. Its Church of Ireland collection is for the counties of Dublin, Kerry, and Carlow. None of the big genealogy websites (FamilySearch.org, Ancestry.com, FindMyPast.com, and MyHeritage.com) have major collections of indexes to Irish church records.

If you have Irish Catholic ancestors who came to America, they more likely immigrated in the 19th century. You will be happy to know that Catholic Church records were not deposited at Four Courts and were not destroyed. However, the biggest issue with these records is that few date from before 1800. Most records date from after the Catholic Emancipation Act of 1829. Some date from decades later. Again, the earliest surviving Irish Catholic Church records are for the city of Dublin.

The Family History Library has a large collection of Irish Catholic records on microfilm but they do not represent all counties and parishes and they have not been indexed or digitized. Once you have identified a parish name, you can search the FamilySearch online catalog to see what is available.

The websites RootsIreland.ie and IrishGenealogy.ie have indexes to many Irish Catholic Church records and you do not have to have a parish name to search them. If you go to the former and search by county, you can see what records are indexed there. In the case of the latter, the Catholic records are for parts of the counties of Cork and Kerry and the city of Dublin.

The best collection of imaged Irish Catholic Church records online is found on the website of the National Library of Ireland at https://registers.nli.ie/, but the records are not indexed. Therefore you have to know which parish you want to search. Then you can search through the digital images page by page, year by year. The records are written in Latin but with a little practice anyone can read and understand the basic terms and forms used. Handwriting is another issue, but again, practice will help with that.

For the counties of Northern Ireland, again see the “Guide to Church Records” at https://www.nidirect.gov.uk/publications/proni-guide-church-records.

If your Irish ancestors came to America in the 17th or 18th centuries, they were more likely Presbyterian. The Penal Laws induced many Presbyterians to immigrate to the American Colonies. According to an online article on Scotch-Irish Americans, “from 1710 to 1775, over 200,000 people emigrated from Ulster to the original thirteen American colonies. The largest numbers went to Pennsylvania. From that base some went south into Virginia, the Carolinas and across the South, with a large concentration in the Appalachian region. Others headed west to western Pennsylvania, Ohio, Indiana, and the Midwest.”[1] Some immigrants arrived at ports in Virginia, the Carolinas, and elsewhere.

There were Presbyterians scattered throughout Ireland but by far the largest concentration was and still is in Northern Ireland. Unlike Church of Ireland and Catholic parishes, Presbyterian congregations in Ireland had no physical boundaries. If you were Presbyterian you walked or rode to the most convenient church (kirk) for services regardless of where you lived.

Presbyterian Church records were not deposited at Four Courts and were not destroyed. But due to the Penal Laws, not many records date from before 1800, so they will not document events in the lives of the early Presbyterian immigrants to America.

For Ulster and Northern Ireland, the best resource to identify what Presbyterian Church records exist is the “Guide to Church Records” at https://www.nidirect.gov.uk/publications/proni-guide-church-records. It is arranged alphabetically by civil parish and gives the name of the congregation. Generally, no original records have been microfilmed by FamilySearch. Only a few have been transcribed and are found in the collection of the Family History Library. Many records are available on microfilm at the Public Records Office of Northern Ireland (PRONI) in Belfast. Some original records (or copies) are held by the Presbyterian Historical Foundation in Belfast. Some original records are still in the hands of the individual churches. A few Presbyterian Church records have been indexed on RootsIreland.ie.

Once again, the best guide to church records in Ulster or Northern Ireland is the one published by PRONI and previously listed. The website FindMyPast.com has an index to some Irish dissenting (non-conformist) church records and others for some Irish Quaker records.

For additional information about Irish church records, go online to the FamilySearch Research Wiki and search for that topic.

In the fourth part of this series on Irish research, we will explore other records that can help you learn about your Irish ancestors.