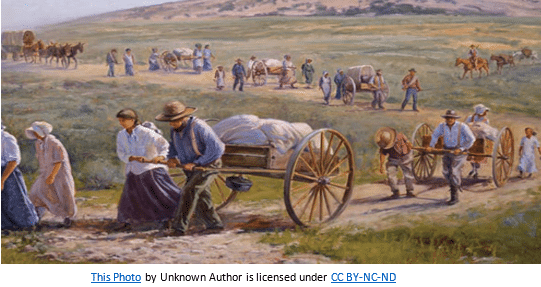 In Utah, Independence and freedom are celebrated all month long in July, starting on the 4th and converging around the 24th. As we near the 24th of July, or Utah Pioneer Day, our thoughts begin stirring up the stories of pioneer ancestors who we have wondered about since our childhood days. One such couple in my family was Jens Jorgensen and Maren Larsdatter, known by their Americanized names, Jens and Marie Jorgensen. The story is told of Jens’ childhood mishap of walking along a stone fence in Torup, Denmark when he lost his balance and slipped partway off the wall. He caught his foot in the fence and in so doing, twisted his leg enough to permanently alter his gait, forcing him to limp for the rest of his life. When he married, he and Marie embraced a new religion, known today as The Church of Jesus Christ of Latter-day Saints. Because of their choice, they were ostracized by their community and eventually decided to go to America to join others who had adopted this same religion. First, they traveled by sea and then by land.

There are on-line resources available to look for your ancestors who might be immigrants to America, especially during the 19th century. A website titled “Saints by Sea” is an interactive database of immigrant Latter-day Saints with all the records compiled into one place.  I looked up Marie Jorgensen[1] and found she traveled from Liverpool to New York, 12 Dec 1855 to 15 Feb 1856.

When I found her name on the site, there was an additional link titled “Read about the voyage” and it led to details about the ship’s name and date of travel, plus a list of those who went on the same voyage as my ancestors, including the digital images of the pages where their names had been recorded before the voyage began. An additional feature was a very exciting section of information titled “Read accounts of this voyage.” There were links to the writings of those who had made the voyage with my ancestors! By clicking on a name, I was able to discover what that journey may have been like for them. For example, I wondered how Jens and Marie made it from Torup, Denmark to Liverpool, England to ride on the John J. Boyd headed for America. In the autobiographical sketch of Mary Larsen Ahlstrom, there was an account of how Mary Larsen and her family traveled from Aalborg, perhaps taking a similar journey as my ancestors:

“…in the month of October,1855 we left our home and began our trip to America. We went to Aalborg and stayed there a few weeks until all the people from that part of the country were ready and we all got on the steamship "Iris" to sail to Copenhagen. We went down the river named Lumfjorden and came to Copenhagen in the afternoon the next day. There we stopped a few days until the steamship "Lyon" was ready to take us on board for Kiel in Sliesvig.

Here we got on a railroad train through Holstein to Gluckstad where we got on another steamship for England. We had a terrible storm on the North Sea. It took us two days and one night to reach England where we arrived in the afternoon and got on the train for Liverpool and traveled all night. We were both tired and hungry when we got to Liverpool.

The sail ship John J. Boyd was loaded with water and provisions for the trip across the Atlantic Ocean.  The 12th of December we were hauled out of the harbor in Liverpool by a steamboat and it went all right as long as we were not out where the waves were rolling high, but after that our troubles began.[2]

To continue the story of my ancestors, Jens and Marie Jorgensen:

They pre-purchased a wagon, team and trappings which they believed would be waiting for them at the end of their voyage from Liverpool to New York, and they planned to continue on to the Salt Lake Valley in Utah territory, but they discovered their trusting natures had been ill-treated and there was nothing for them when they arrived. In an effort to join up with the companies traveling west, they worked for about a year in St. Louis, Missouri and gathered the means to build a handcart, planning to make the journey in this manner. It was no surprise that the leaders of the traveling companies were unwilling to take on a man who was lame and who had a wife expecting a child, but they finally were able to join up with other handcart pioneers and were on their way. Considering Jens’ lameness and in order to keep up with the group, they worked out the logistics of travel in this way: Jens, aided by his cane, would leave early in the morning before the rest of the company, and traveled alone until around noon when the handcart group would catch up with him, pass on by, then leaving him to go the rest of the day’s expedition solo, once again joining up with the others when arriving at the encampment later that evening. One day, in the afternoon, he was aware of a greatly increasing thundering noise that made him think of possible rain, but soon realized a herd of buffalo was headed across the open land and he was in their path. Family lore says he dropped to his knees in prayer, and then stood to face the stampeding herd, waving his cane in the air above his head, shouting at the top of his lungs. The large group of bison miraculously separated as they passed by him, leaving him standing and unhurt in their wake. The handcart company was aware of the buffalo herd running toward his path, and felt he had probably been lost, taking shovels with them to locate his remains on the prairie. Imagine their surprise when they found him walking towards the camp.

To find stories and information on the overland trail journeys of these Utah bound pioneers, try the Pioneer Database (1847 – 1868) which is searchable by name.

As I grew older and began interacting with some of my second and third cousins who were also descendants of this couple, we found there were a few variations on the story. That is how our immediate family discovered the cause of Jens’ lameness, his childhood accident. Others expressed that Jens noticed a rock in the prairie and stood behind it as the buffalo passed. Whatever the truth is, the story made a great impact on all those who heard it, and I imagine it was originally told with the hopes that the descendants of this couple would remember the miracle and take their own courage from the experience which helped shape a life of devotion to and faith in their God, as did James and Marie Larsen.

Whether or not you have direct ancestors who crossed the plains with the pioneers who were members of the Church of Jesus Christ of Latter-day Saints, you may have relatives who made this journey. To discover any of these pioneer relatives, log into FamilySearch.org and ensure you have a pedigree there which extends at least two centuries. Click on the heading “Activities” and at the drop-down menu, click on “All Activities.”  At the ensuing page, choose “My Pioneer Ancestors” and see who the system may produce as pioneer relatives.

Our researchers at Price Genealogy are ready to help you find your pioneer ancestors no matter when they may have crossed the plains.