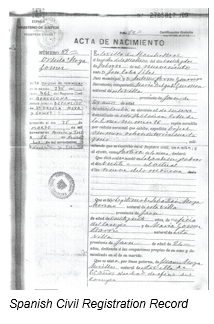 Napoleon annexed the Netherlands in 1806, proclaiming his brother Louis 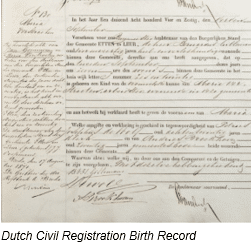 Bonaparte king of Holland on 5 July 1806. Civil registration was implemented by French decree on 1 March 1811 in the Netherlands, requiring that civil authorities in each municipality record the births (geboorten), marriages (huwelijken), and deaths (overlijden). Even after Napoleonic occupation ended in 1813, the Netherlands continued to keep the detailed civil registration records introduced by the French, and have continued to do so until the present.

In order to find civil registration records for your ancestor, you must identify which province your ancestor lived in. This can be done by using a gazetteer or by searching for your locality on the FamilySearch Wiki. Virtually all Dutch civil registration records have been digitized and indexed, thus proving to be an irreplaceable resource in Dutch genealogical research.

Websites and data sets that are useful for Dutch civil registration include:

Civil registration records were recorded in either French, Dutch, or German, 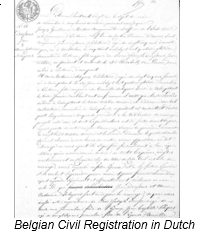 depending on the language locally spoken. Online collections that are useful for finding Belgian civil registration records include:

In 1807, Napoleon created a new Polish state, fashioned out of territories previously held by Prussia and Austria, called the Duchy of Warsaw. Civil registration of births, marriages, and deaths was implemented under French rule in the Duchy of Warsaw on 1 May 1808. Upon Napoleon’s defeat in 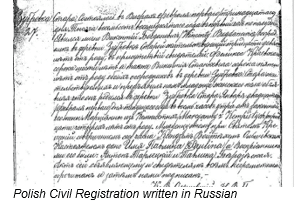 1815, the Russian government assumed control of the area. The Russian government maintained civil registers. In 1918, Poland became an independent republic, and they too continued with recording civil registration. Thus, civil registers in the Napoleonic format are found in all of Russian Poland, in Kraków, and in parts of the Prussian province of Posen, all of which were formerly part of the Grand Duchy of Warsaw. At the beginning of civil registration in 1808, records were kept in Polish. A decree in April 1868 required that they be kept in Russian. In 1918, they were again kept in Polish.

The Family History Library has microfilmed the records of many town in Poland. These can be accessed by searching for the town or civil registration municipality your ancestor lived in on the FamilySearch catalog. Online resources that can be helpful in location Polish civil registration records include:

Napoleon’s forces first invaded Spain and Portugal in 1807, and by 1808 Napoleonic France occupied the territory. Unlike other European nations annexed by France, Spain and Portugal continued to resist French rule. Battles between French, Spanish, Portuguese and British armies beset the area until 1814, when the French were defeated. Because the French were so focused on fighting in the area, they never implemented civil registration.

Though this era of Napoleonic civil registration grew out of Napoleon’s conquests, it has been an invaluable resource for family historians to discover and reconstruction their heritage. The expert genealogists at Price Genealogy can help you recover family memories of earlier generations.

Have you done any civil registration genealogy work?  Let us know in a comment below!