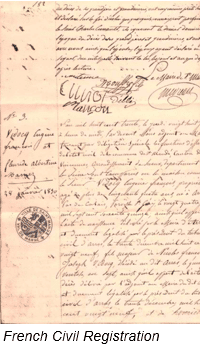 Under the French Republic, Civil Registration was introduced to France in 1792. As France expanded its imperial rule across much of Europe during the Napoleonic Wars (1803-1815), French officials implemented French civil law and code into its occupied territories. The Napoleonic Code was adopted by regions of Italy, regions of Germany, the Netherlands, Belgium, Poland, Spain, and Portugal, along with those nation’s respective colonial holdings. Thus, all of these regions adopted Napoleonic forms of civil registration for births, marriages, and deaths. Civil registration records for each of these regions will be discussed below.

Civil authorities began registering births, marriages, and deaths in 1792, with universal coverage across France beginning at this date. Because these records cover all of the population, are indexed, are easily accessible, and include people from all denominations, they are an absolutely crucial source for French genealogical research. French civil registration records include registration for births, marriages, and deaths (each of these types were discussed in Part 1). Furthermore, divorce was permitted in France from 1792 to 1816, and after 1884. Divorce records were stored with civil registration records, and often the registrar would note the divorce in the margins of the divorced couple’s original marriage record. After 1877, the civil registrar gave a booklet to each couple he married. This booklet included an extract of the marriage record. The couple was responsible for taking the booklet to the registrar as each of their children were born, and the registrar would update the booklet with the child’s birth information and return the booklet to the parents. Deaths were also recorded in the booklet. Families kept possession of their family civil registration booklets and often handed them down to their children.

Websites and data sets with French civil registration records include:

The FHL also has microfilmed copies of some civil registration records. These can be found organized by region in the FamilySearch Catalog. 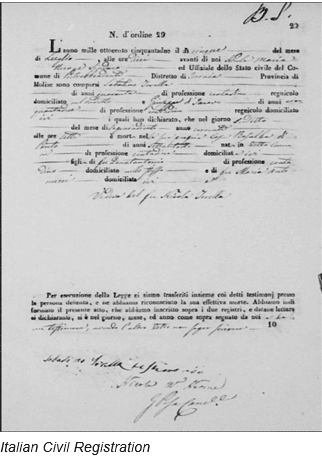 Italian civil registration records consist of birth, marriage, and death records. Divorces were not allowed in Italy until 1970. Furthermore, a civil record unique to Italy is the Stato di famiglia, or state of the family certificate. The comune (a rough equivalent of a municipality or township) kept a record of each family within the comune, and updated each change, including births, marriages, deaths, and emigration. Historical states of the family are kept at the provincial archive, and document past generations of families. Annual and ten year indexes, organized alphabetically, are common in Italian registration records.

Civil registration began in certain regions of Germany in 1792 under French rule, and became instigated nation-wide in 1876. Below lists the start dates for civil registration in Germany by region:

German civil registration records include birth (geburtsregister), marriage (heiraten, ehen, or trauungen), and death (sterberegister) records. The first step in finding your German ancestors in civil registration records is to search for the town that your ancestor lived in on MeyersGaz.org to identify the location of the Standesamt, or the registry office. This is indicated by the abbreviation “StdA.” Upon identifying the location of the registry office, search for that locality in the FamilySearch Wiki and Catalog to determine record availability. Online records are listed on the FamilySearch Wiki page for each individual province.

Our examination of Napoleonic inspired civil registration will continue with part 3, coming soon. The experts at Price Genealogy can help you with your genealogy discoveries.

Have you done any civil registration genealogy work yet?  Let us know in a comment below!