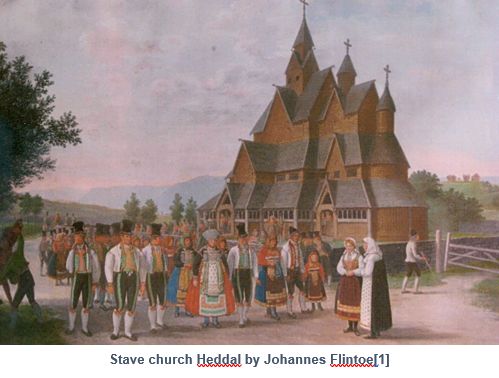 Do you have Norwegian genealogy? Between 1825 and 1920, more than 800,000 emigrants left their homes and farms in Norway to travel abroad. Most came to America, but many traveled to Canada, South America and beyond. The only country that had a greater percent of its population emigrate than Norway was Ireland. As a result, many people around the world can trace their ancestry back to Norway.

When you think of Norway you might think of the Vikings, traveling and pillaging across the Western hemisphere. The Viking period or Vikingtiden only lasted from ca. 800 to 1050 AD in Norway. For most of the last 1200 years, your Norwegian ancestors were humble Christian farmers. In the early 1500s, like the other Nordic countries in Northwestern Europe, Norway adopted Lutheranism as its state religion and thus began a legacy of great recordkeeping.

Have you ever found your Norwegian ancestors in the Lutheran church books or kirkebøker?

Parish Records and the Archives

The Lutheran church divided itself up into dioceses and then clerical districts or prestegjeld. Each clerical district was assigned a priest and typically had responsibility for a couple parishes or sokn. The priest kept many of the records we rely on today in Norwegian genealogy in the form of church books. Beginning with the 1700s, Norwegian archives have the church books for most every clerical district and parish. While many church books started being kept earlier, only some of the books from the late 1600s survived.[2] The priest documented christenings, confirmations, marriages, and burials. Between 1812 and 1901, they also frequently documented people who moved in and out of the parishes.[3] If every one of these records is found for a family, it gives a pretty good picture of their lives.

Norway currently has eight regional archives across the country that hold the vast collection of church books. Fortunately, all the church books up to around 1940 have been scanned and made available for free on the website, Digitalarkivet.no.

Most church books on Digitalarkivet are available to look at up until 80 years before the current year. Some of the church books have been indexed, but not all; so sometimes, it is necessary to use the birth, marriage, and death indexes for Norway on FamilySearch, Ancestry, or MyHeritage. Since these indexes are not complete either, other records may be needed to pinpoint where exactly an ancestor lived before looking in the church books.

Have you ever found your Norwegian ancestors in the censuses or folketellinger?

Norway releases their censuses to the public after 100 years. Currently, the censuses are available up to 1910; but this year, in December, the 1920 Norway census will be released to the public. This is very exciting! The 1920 census will enable many people to make new discoveries about their family.

Unlike the US and other countries, Norway did not take censuses of the whole population by name every ten years. Instead, Norway has six censuses publicly available that enumerated the whole country starting in 1801:

These censuses typically included the place of residence, name, relationship in the household, and age. Later censuses also asked for birthplace and even for the exact birthdate. Almost all of these censuses are searchable on FamilySearch, Ancestry, and MyHeritage.

Other censuses were taken from 1815-1855, 1870, and 1885. However, the censuses from 1815 to 1855 were mostly statistical. This means they only kept track of the number of people living in any given place, not their names (there are some exceptions). The 1870 and 1885 censuses were only taken for cities and seaports, though a number of cities and ports are missing.

Norway conducted some early counts of the population for tax purposes and these records can be valuable for extending family lines past the 18th century. Typically, these census-like records only count and enumerate the men of the family. They also do not cover the entire country. The three main records are:

These records are not consistent from place to place and time to time, but a good number of parishes had at least one person counted during the middle of the 18th century.

This census covers most of the country, but only counted men. Nevertheless, they kept track of fathers and sons, and Digitalarkivet has made much of the census searchable on their website.

This census is interesting because there are two copies of it. Both the priest or søknepresten and the local baliff or fogden counted the men in their jurisdiction. This census kept track of farm owners and their sons, then cottagers and servants.

Have you ever found your Norwegian ancestors in the farm books or bygdebøker?

The farm books are the crown jewel of Norwegian research. Beginning in the early 20th century, researchers compiled the local histories and genealogies of specific communities. While these are all written in Norwegian, there are now thousands of Norwegian communities throughout the country that have the documented genealogies of their local area back to the 1600s and beyond. It can be as easy as looking up an ancestor’s name in the index and finding their completed genealogy, including all of the dates and places and relationships.

Farm books primarily exist in the printed format. Limited copies were made, especially of early books, so it is important to know which libraries have farm book collections.

*None of these collections are totally complete.

Some farm books have been put online. The largest online collection is on the National Library of Norway’s website, www.nb.no. However, many of the farm books are only viewable with a Norwegian IP address. Here are a couple lists of online farm books:

This is part one of a two-part series on Norwegian genealogy research. Part two identifies some of the obstacles/challenges in Norwegian research and how to get past them.

Do you have any Norwegian Genealogy work that needs to be done?  Price Genealogy’s experts can help you with your Norwegian research.