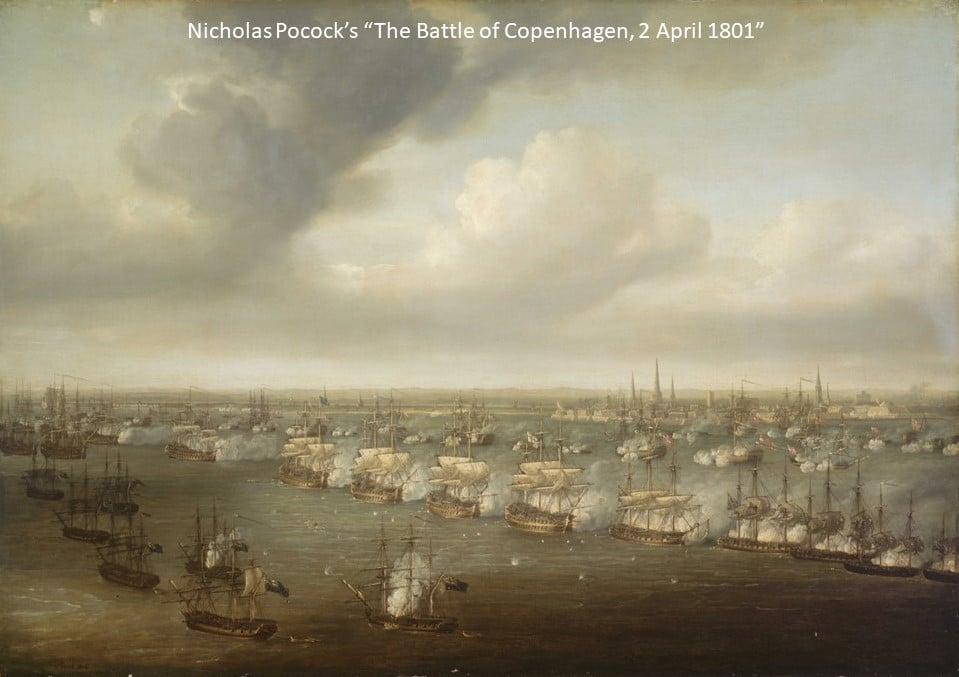 The Royal Navy impacted British history and our ancestors’ lives, changing the course of world history. There were 110,000 people serving in the Royal Navy in 1805. Its records are vast. Once printed publications and online databases have been explored, research in original records is best accomplished at The National Archives (TNA) in Kew and at the Caird Library at the National Maritime Museum (NMM) in Greenwich. I’ve had the opportunity to research my naval ancestors in original records at both of these archives, and I have also enjoyed naval history at the National Museum of the Royal Navy at the Portsmouth Historic Dockyard in Portsmouth, England.

This first of two blog posts focuses on Royal Navy officers. The case studies concern some of my ancestors and relatives who were officers. A subsequent post will consider ordinary sailors, also known as “ratings.” Selected sources are featured with each example and are bolded. ADM refers to the Admiralty records at TNA. Bringing family history and regular history together make it all the more interesting.

The basic ranks of commissioned officers of the Royal Navy run from admiral to commodore, captain, commander, lieutenant commander, lieutenant, sub-lieutenant, and midshipman (officer in training). There are also warrant officer and petty officer ranks. These people had technical or specialized skills, like master, purser, engineer, boatswain, gunner, chaplain, carpenter, cook, surgeon, sailmaker, etc. A ship’s master was usually in charge of navigation, not military operations. Some men were the “fighting officers,” who focused on tactics and received their rank by commission, and other men acquired their rank by warrant. These advancements were reported in the London Gazette. 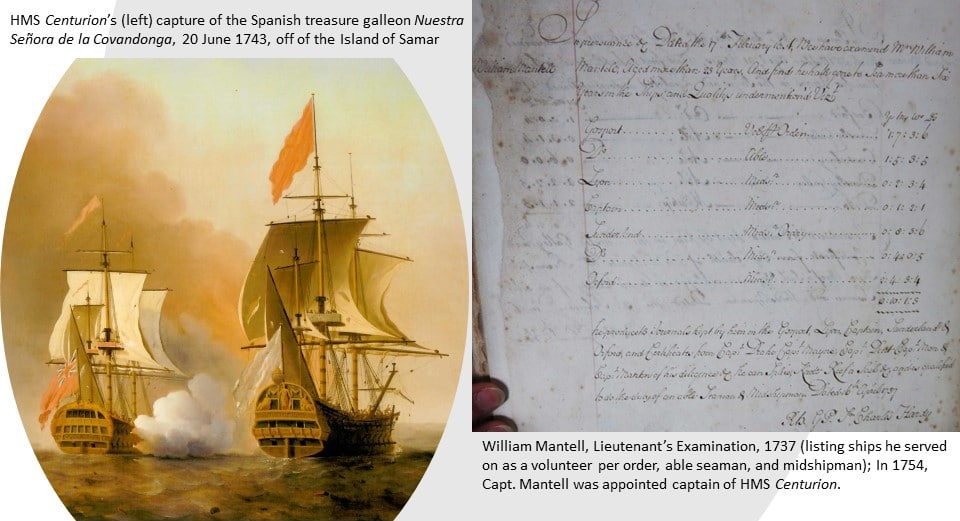 Capt. William Mantell[1] entered the navy at age 17 in 1730 as a “volunteer-per-order,” which was common for sons of the gentry who hoped to become officers. He was an able seaman and midshipman for six years before passing the Lieutenant’s examination (ADM 107/3/314) in 1737. His first commission as a lieutenant was in 1740 (ADM 6/15/290). I’ve examined several original documents concerning him in Navy Board correspondence files. In 1750, Admiral Boscawen appointed him captain of HMS Syren (20 guns).

Mantell’s career was published in John Charnock’s book, Biographia Navalis (1794). In 1754, he was appointed as captain of the famous ship, HMS Centurion (54 guns). In the 1740s, Centurion had circumnavigated the globe as Commodore Anson’s flagship. The Centurion has been chronicled in many naval histories and has been included in a couple detailed books on its notable service.[2],[3]  Mantell helped transport General Edward Braddock’s troops to Virginia in 1755. But Braddock’s army suffered a devastating defeat at Fort Duquesne (now Pittsburgh) during the early French & Indian War. In 1759, Capt. Mantell assisted with the assault on Quebec City, the fall of which led to the British conquest of New France. British Army General James Wolfe mentioned Mantell favorably in dispatches (CO 5/51)[4] and the Centurion helped protect the landing of Wolfe’s troops behind the city.[5]

A lot can be learned about Mantell and the Centurion in contemporary newspapers.[6] The NMM produced an 8-minute video on the Centurion’s history, which includes close-up images of the 1747 model of the ship (https://www.youtube.com/watch?v=RAM-K193fYk). These ships were engineering and artistic wonders. I’ve examined Mantell’s 1750s captain’s log (ADM 51/176, books 1-6) at TNA. The Discovery catalog shows that there are also muster rolls and payrolls available. 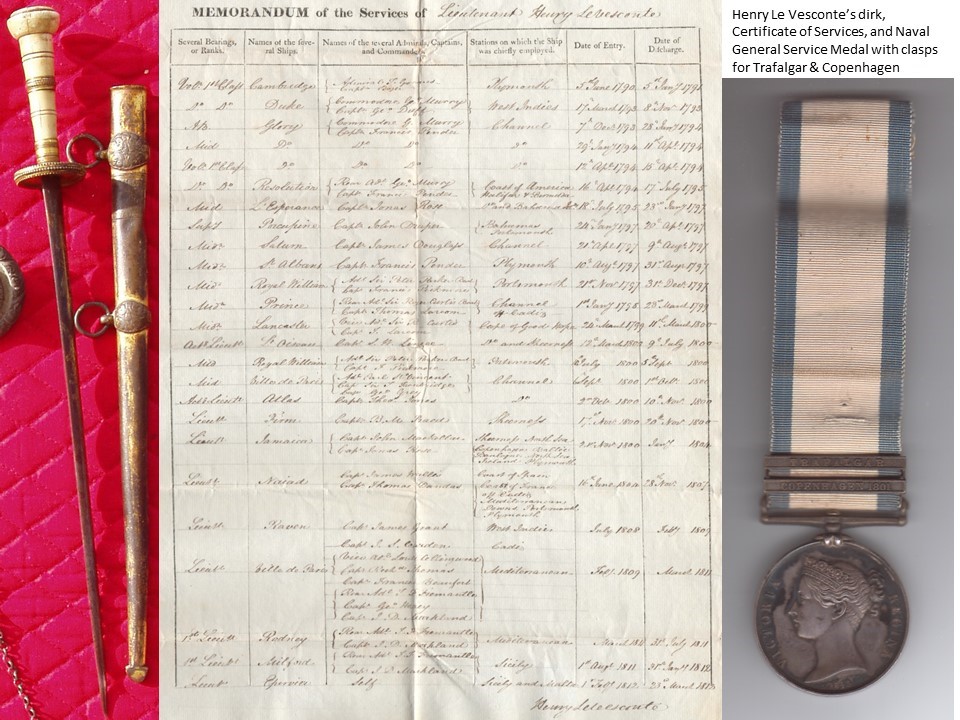 Henry’s family was from the Channel Islands, which the British Crown controlled. I helped a distant cousin scan his original naval documents. Henry entered the navy about age 11 in 1790. The original lieutenant’s commission (see ADM 9/7/2242) came down in the family. Le Vesconte’s service is included in William O’Byrne’s 1849 publication, A Naval Biographical Dictionary. In 1801, he saw action at the Battle of Copenhagen. Lord Nelson commended him for capturing six enemy gun vessels. As lieutenant of HMS Naiad (38 guns), he served at the Battle of Trafalgar (1805), and in 1847 was awarded the Naval General Service Medal[7] (NGSM) with clasps for Copenhagen and Trafalgar. All people who served at the Battle of Trafalgar are included in the “Trafalgar Ancestors” database.[8] The source given is the Naiad’s pay book (ADM 36/16799). Findmypast has an excellent collection of Navy Lists, and Le Vesconte’s appointment as commander in 1828 is shown.[9] 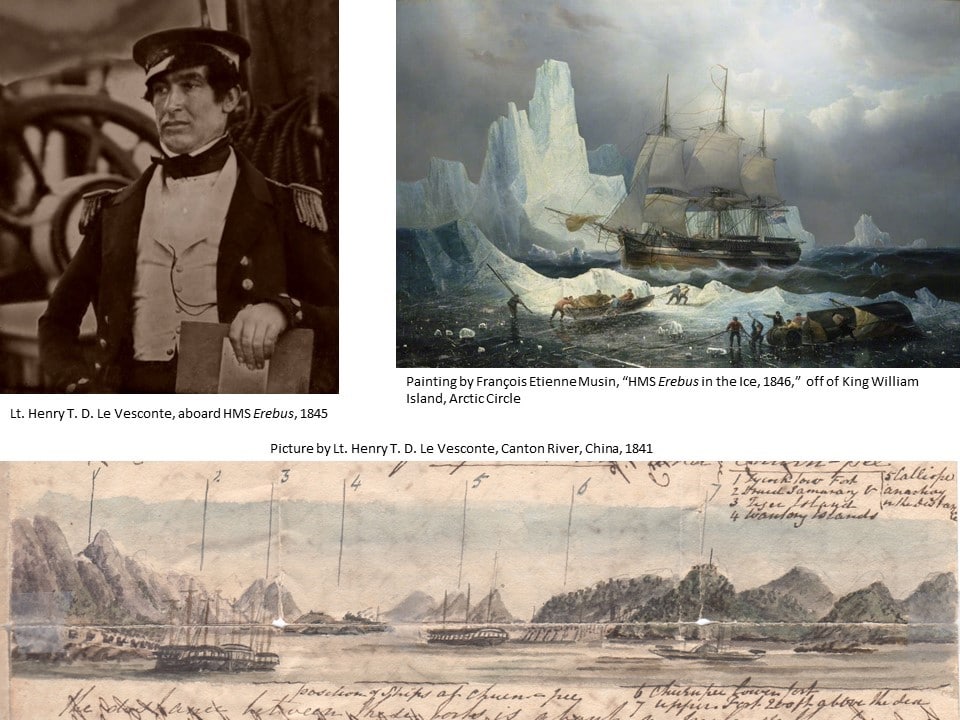 Henry T. D. Le Vesconte, the son of Henry, has entered the history books for his participation as second lieutenant of HMS Erebus on Sir John Franklin’s famous, and ultimately disastrous, Arctic voyage that attempted to find a “northwest passage” over Canada. There is a Wikipedia article on Le Vesconte.[10] It was exciting to learn that this submerged ship had been discovered in 2014.

O’Bryne’s book, A Naval Biographical Dictionary includes Henry’s career. In 1841, his gallantry at the capture of Canton (now Guangzhou), China, during the First Anglo-Chinese War, was reported in the London Gazette. As lieutenant of HMS Clio, he participated with the West African Squadron suppressing the slave trade. 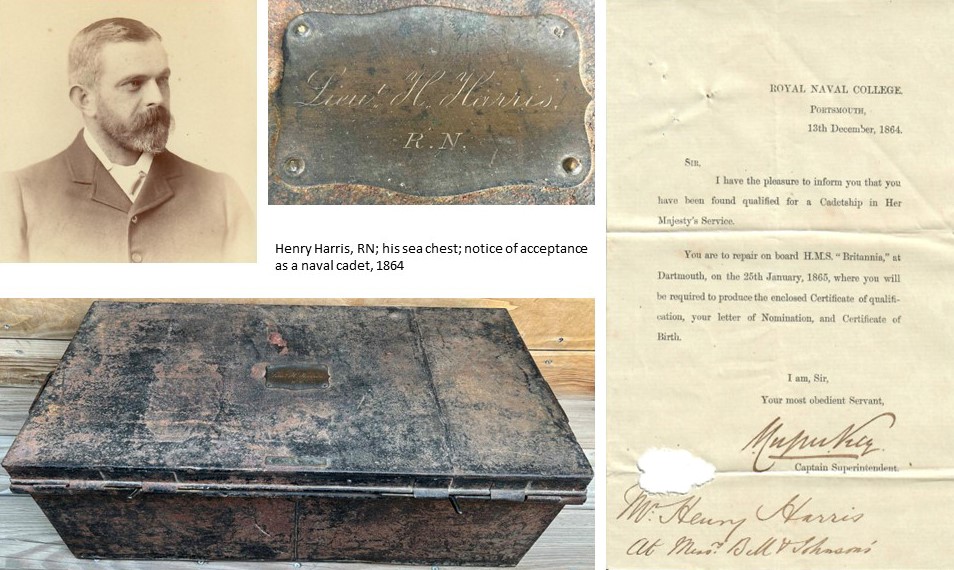 As a teenager, I was given the original Naval Cadet papers of my grandfather’s uncle, Commander Henry Harris. His metal sea chest shows “Lt. H. Harris” on the nameplate.

Henry is found in Navy Lists and in the “Royal Navy Officers’ Service Records 1756-1931,” which took me to original service documents (ADM 196/18/229) (ADM 196/38/599). A helpful biography of him is on The Dreadnought Project website.[12] His career was spent in the China Station, at the Royal Naval College, and at sea as a lieutenant and commander[13] protecting the North Sea Fishery. The 1891 census shows him as “crew” for that year.[14] Detailed descriptions of Henry’s ships are on Wikipedia.

My grandfather’s first cousin, Lt. Collyns served in early submarines before World War I. He is found in (Executive) Officers’ Service Records (ADM 196/143/70) (ADM 196/48/70). A short biography on the The Dreadnought Project website.[15] As part of the Channel Fleet, Collyns became lieutenant and commander of the newly constructed HMS B5, a coastal submarine, from July 1906 to January 1909.

Some Royal Navy sources provide family and genealogical background, and others tell of the officer’s service. Ranks and names of ships are often given in censuses. Naval schools and hospitals, as well as pensioners and those on half-pay were enumerated. Civil registration of births, marriages and deaths provide ranks and names of ships. Church records in ports commonly contain sailors’ vital events. Shipping news was featured in contemporary newspapers.

The two major categories are service and pension records. Certificates of service give the names of ships that men served on and sometimes the men’s dates and places of birth. These documents were used for rank advancements, pensions, and other benefits. These certificates were needed to apply to the Royal Greenwich Hospital as an in-pensioner or out-pensioner. In addition to the sources mentioned above, consult these finding aids and databases:

[2] Shirley Fish, MHS Centurion 1733-1769: An Historic Biographical-Travelogue of One of Britain’s Most Famous Warships and the Capture of the Nuestra Senora De Covadonga Treasure Galleon (Bloomington, IN: AuthorHouse UK, 2015). For William Mantell’s time as captain, see pages 332 to 383.

[3] Leo Heaps, Log of the Centurion (Based on the original papers of Captain Philip Saumarez on board HMS Centurion, Lord Anson’s flagship during his circumnavigation 1740-44 (New York, NY: Macmillan Publish Co., Inc., 1973).

[7] “UK, Naval Medal and Award Rolls, 1792-1972,” Ancestry (https://www.ancestry.co.uk/search/collections/1687/). Both Henry and his son Henry Thomas Dundas Le Vesconte/LeVesconte are found in this collection.