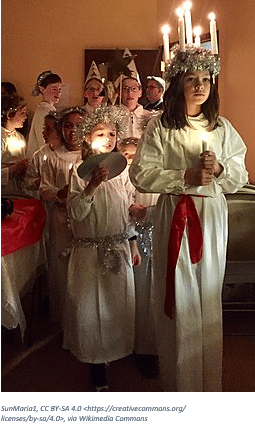 The official start of the Christmas season varies from country to country. In the United States it is often considered to be the day after Thanksgiving. However, in Sweden the holiday season is kicked off with the celebration of St. Lucia Day (“Luciadagen” in Swedish) every December 13th. The lighted candles on the girls’ heads are particularly beautiful in the dark at night. This holiday has evolved over the centuries, like other holidays around the world marking the start of the winter holiday season. For Americans with Swedish ancestry, this holiday is well worth getting to know as it will connect you with your cultural heritage. Over one million Swedes immigrated to the United States between the 1860s and the 1920s.

The three main features of a traditional observance of St. Lucia Day are, first, a girl dressed as St. Lucia preparing the whole household at dawn, a highly symbolic performance. Second is the procession of attendants who follow Lucia—the tärnor (maidens) and the stjärngossar (“star boys”). Third, the party after the procession ends.

Before sunset, two other elements of Sankta Lucia Dag traditionally occur. This involves viewing special programs on television or in person. This part of observing St. Lucia Day can be more challenging for those outside of Sweden, but one can participate online via live or pre-recorded programs.

The procession is usually done by children and teenagers, with an 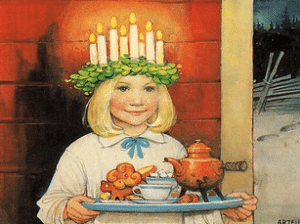 older young girl selected to portray St. Lucia. In Sweden it was tradition to have contests or elections to determine who would be St. Lucia for the community’s procession. These days it is more often the luck of the draw that determines who will portray St. Lucia. Behind St. Lucia there are attending maidens, star boys, and also elves, gingerbread people, or other mythological creatures associated with the holiday season. If one lives outside of Sweden, there is a good chance a local Swedish cultural association may arrange for a St. Lucia procession, so don’t count yourself out of celebrating St. Lucia Day if you are not living in Sweden. To find a local association, search the web for an organization planning a St. Lucia celebration. There are often associations in most larger towns and cities, but they also can be found in some smaller towns, especially in the mid-western parts of the United States. I found videos of it on the Facebook page for the Swedish Heritage Society. 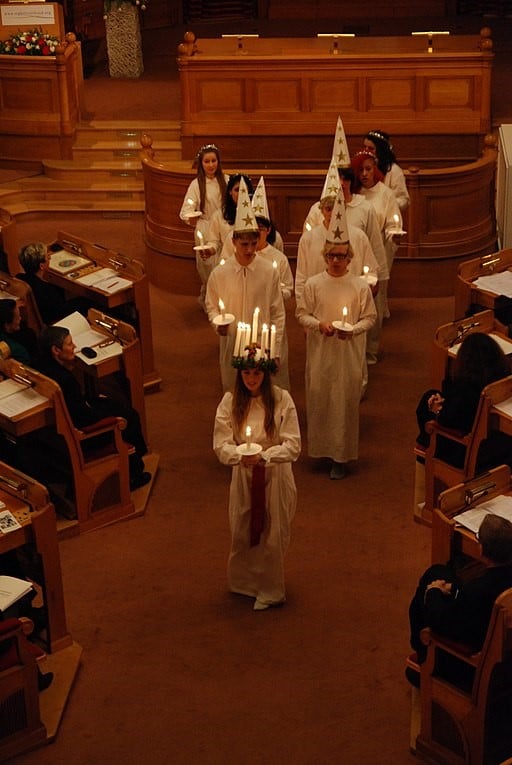 of people that celebrate St. Lucia Day, you can expect to see a procession with persons dressed in long-sleeved white dresses with a red sash and red stockings. The main difference between St. Lucia and her maidens is St. Lucia’s head gear. St. Lucia wears an evergreen wreath as a crown with seven candles on her head. Behind the maidens and St. Lucia are Star Boys, who each wear white robes with a white cone-shaped hat with stars on it, which appear similar to what most persons would recognize as a wizard’s hat. All participants each hold a candle. Traditionally these were white wax candles with a real flame, however, many today opt for an electric candle for safety reasons. The procession is traditionally lit solely by candles, which symbolize St. Lucia as a bringer of light to a world in the depths of the winter season.

After the procession occurs, St Lucia moves into the center, with the maidens in a semicircle behind her and the other participants along the sides and back of the semicircle. St. Lucia leads the whole group in singing Lucia Day's song. For those unfamiliar with the song, here are the lyrics in Swedish and English. In celebrations outside of Sweden, it is common for a translation to be sung instead of in Swedish. 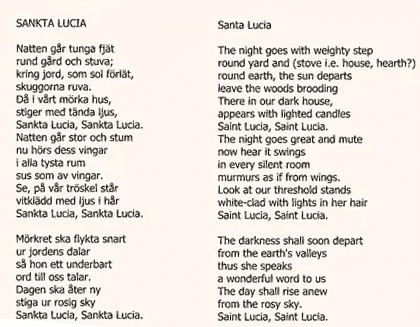 Concerning the after-party, the official colors for St. Lucia are white and red, so all decorations follow that color scheme as much as possible. Other traditional Christmas decorations, as well as Swedish flags, are considered appropriate. A Lucia crown cake is usually a round-shaped coffee cake with seven candles placed in a circle.  Adults traditionally drink glögg, a type of mulled wine, but one can serve coffee or lingonberry juice for non-drinkers.  One also can serve

traditional Swedish foods, such as meatballs, gingerbread cookies, and buns. Usually, recordings of traditional St. Lucia day songs and other traditional Swedish folk music are played or performed in the background to liven the atmosphere. After that, everyone retires for the evening and commences celebrating the Christmas season as their customs dictate and circumstances afford.

At Price Genealogy, we help people every day grow closer to their ancestral roots, whether they be Swedish or otherwise. All you need to do is tell us what you want, and our team will be on it. We are the best value full-service research company, and we’ve been serving people like you for 45 years.