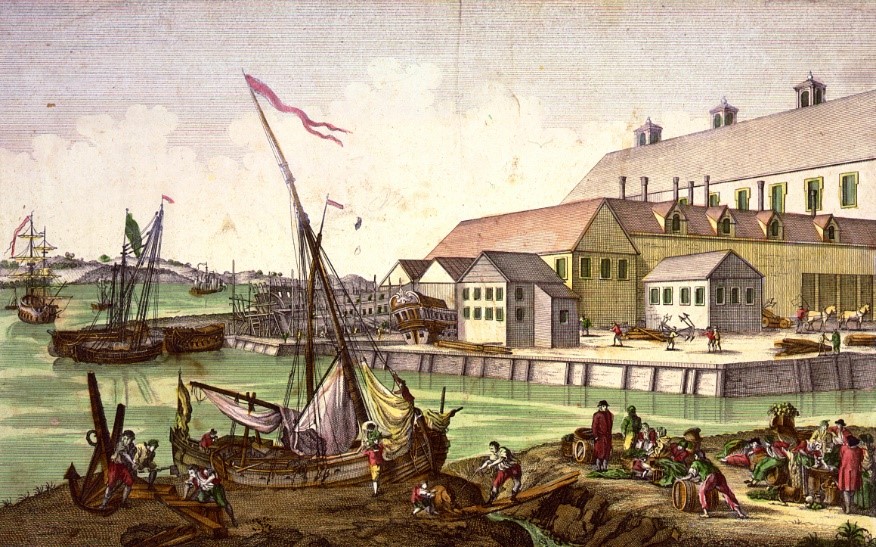 Colonial America was a land of opportunity, offering possibilities and freedoms that most impoverished Europeans could only dream of. With a voyage across the Atlantic, these dreams could become realities. The problem was that those most wanting this opportunity couldn’t afford passage across the Atlantic. Indentured servitude presented an opportunity for poor people to get to America to start new lives.

Indentured servants sold themselves into servitude to pay for passage to America. They would offer themselves to merchants or ship captains, who would sail them across the Atlantic Ocean and sell them to people in America needing laborers. Oftentimes, the merchant or captain would receive land from the crown based on how many people they brought to the colonies. The person who bought an indentured servant became their owner or master for the term of the indenture—usually four to five years. During that time, the indentured servant was valued as property.

Convicts did not come voluntarily as they were sent to America in servitude as a punishment for their crimes. Convicts’ terms were usually longer than those of indentured servants and redemptioners.

This went on through much of the 17th and 18th centuries, and into the 19th century. Indentured servitude declined in the 18th century as importation of slaves increased.

Because owners of indentured servants wanted as much labor as possible for their money, they worked their servants very hard. However, the masters had to be careful not to work their servants too hard, because they could die from exhaustion or might decide to run away. Runaways are fascinating to research as you will see below.

At the end of the indenture’s term, the servant was freed from servitude and would receive his (or her) “freedom dues,” which differed in each colony and changed over time. In some colonies, the freed servant would receive clothes, money or tools. Some colonies provided land, which the freed indentured servant often sold. A freed indentured servant was allowed to start a life of his (or her) own, and the freedom dues given them were things that would help with that. 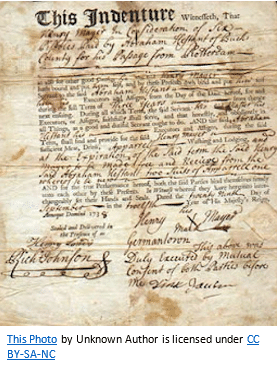 When an emigrant sold himself into servitude, indenture papers were created. In England, these were copied by clerks in ports who compiled them into registers. Not many of these papers survive in the U.S. because freed indentured servants had no motive to keep their indenture papers.

During the term of indenture, servants created very few records. Once freed, the records they created may not mention previous status. This makes it difficult to identify an indentured servant in the U.S.

Another challenge with researching indentured servants is they rarely traveled with family or neighbors. This means that FAN (family, associates, neighbors) club methods of research often will not work.

Another possible challenge with researching indentured servants is possible discrepancies with recorded birth places. Some records required the last place of residence rather than the birthplace. When a birthplace was given, the immigrant may have listed the nearest big town to their village. Therefore, research may need to be conducted in a broad area.

How to Use the  Immigrant Servants Database:

If you have an ancestor who was an indentured servant, the Immigrant Servants Database will likely be a good place to find information about them. Like any database, this database has a basic search engine, and an advanced search engine. The third way to search is to click on a letter of the alphabet and browse by surname.

Once you get to an ancestor’s page, you will see an abstract of information, listing at minimum the name, date, and place of indenture. Some entries include family information such as parents and spouse, birth information, arrival information including the ship, information about the master, etc. The information varies from entry to entry.

If there is no link in the citation, or the link is broken, there are multiple ways to look for the information. The easiest method would be to highlight the citation, right click it, and select the option to search Google for the highlighted text. This most often leads to links to buy the book; sometimes it leads to a digital copy of the book.

To look for a digital copy of the book, search in Google Books or in FamilySearch Books.

The database entry for Timothy Linch states he was born in 1728 in Ireland, that he was an indentured servant in 1753 near Trenton, Burlington, New Jersey, and that his master’s name was Thomas Hooton. This is not very much information to base research on, and it’s rather dull. Following the citation led to far more interesting information about Timothy. More information can be extracted from the record cited than the database entry, and the record gives better research clues.

The record cited led to a notice about a runaway, as seen below.[i]

The best thing an indentured servant could do for his distant posterity was to run away from his master, because the genealogically information contained in the runaway ad is so valuable. The physical description of Timothy Linch would be fun for his posterity to have, especially if any of them share those features.

Timothy Linch ran away about two months before the advertisement was posted in Philadelphia. It is unlikely that Thomas Hooton waited two months to advertise concerning his missing servant. According to Google Maps, Trenton (New Jersey) and Philadelphia (Pennsylvania) are an eleven-hour walk to go from one to the other. Riding a horse or in a carriage in the eighteenth century would certainly have taken several hours. Posting an ad in a big city this far away would not have been convenient for Thomas, but a bigger newspaper would have reached a larger audience. After being away for two months, it is likely that Timothy could have gone far, thus necessitating the need for a broader audience the see Thomas’s advertisement.

It is also important to note that the advertisement stated that Thomas lived near Trenton, rather than in Trenton. This suggests that he had a farm, and that Timothy may have worked on this farm. Timothy apparently was not happy with the treatment and work conditions that he was subjected to.

There is no indication in the clipping of how long Timothy had been in Thomas’s service, nor how much longer he had to go. The statement that Timothy “talks very thick, with the brogue on his tongue” suggests that he had not been in the colony long enough to have lost his heavy Irish brogue.

If you need help researching your indentured servant ancestor, the experienced genealogy researchers at Price Genealogy can help.