How to Search Wales Genealogy Records

Land of poets and music. Land of wild beauty and dark mines. Land of genealogical mystery …..What’s that you say, genealogical mystery? Maybe you thought the Wales genealogy records were just like records in England – the same Civil Registration records, the same census records, even the same church until 1920. It is the subtle and not so subtle differences that create the mystery in genealogical research in Wales!

Before we attack the greater mysteries of Wales genealogy records, let’s look at a Welsh family and unravel some of their family history mysteries. It is an example to all of us not to take family “facts” as being accurate.

Lilian Sarah Nash was born in the spring of 1882 in Swansea, Glamorganshire. Lilian was born during the years of civil registration of births, during the years of the census and during the years when the Church of England was the state church for Wales. The lives of the Nash family should be quite straightforward but family lore and family secrets can make things complicated.

Lilian Sarah Nash is my grandmother and I grew up hearing many family stories about the Nash family. Here are a few:

Lilian had left Wales in her late teenage years and was among the many young Welsh people who moved to London in the late Victorian and early Edwardian years (more about this in next week’s blog). Because Lilian married and raised her family in London, the truth behind many of the family stories lay hidden for many years. A few months of research in to the Nash family uncovered some truths behind the family stories:

The birth of their first child, Kate Elizabeth followed five months after the marriage. Kate Elizabeth was baptized on the 12th of March 1873 and died just before her first birthday. I am not sure that the speedy birth confirms that Agnes was very strict and narrow minded – maybe that came later in her life! 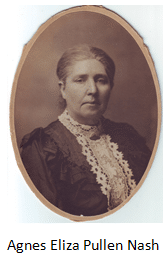 Following up on the story that Jestyn had been killed in a railway accident, I searched the British Newspaper Archive for further information. (I searched at the old Newspaper Archive in London, but many Welsh newspapers are now online. Learn more about this in the next blog.) I found Jestyn’s death reported in newspapers in the year 1914. Jestyn was 27 years old when the fatal accident occurred. Wait a minute! If Jestyn was 27 years old, he was certainly old enough to have married. A quick search of Civil Registration Marriages proved my theory correct – Jestyn had married Keziah Llewelyn during March of 1913.

Jestyn died approximately one year after he married Keziah. I began to wonder if they might have a child. Once again, Civil Registration answered my question - Doris Margaret Nash was born during the March Quarter of 1914.

A few years after my research gave me all these clarifications, the 1911 census was released and Agnes and Edwin proved that some of my answers were correct.

Jestyn is shown in the household, aged 24 and single (remember, he married in 1913), proving that he didn’t die as a teenager. The number of children born in the marriage was listed as 16 but the number 16 is crossed out and 17 superimposed. The number of children listed would seem to be correct but, Elsie Nash, shown as a daughter, aged 17, is actually their grand-daughter, not their daughter. For most of her life, Elsie thought that she was the youngest child in the family but she was actually a grandchild – but that is another story!

We will leave the Nash family with some mysteries still outstanding.

A couple of the documents shown or mentioned above, for the Nash family, have subtle differences from their equivalents in England.

Even today, many people in Wales speak their native language by choice, although most speak English fluently. All street signs are in both English and Welsh and many records and headstones are found to be written in Welsh. Welsh is a Celtic language, beautiful to hear but challenging to read or translate. For anyone wanting to conduct search Wales genealogy records, a basic knowledge of Welsh words relevant to family history is extremely valuable.  The list below shows just a couple of words you might find in church records, probate records or family histories:

The similarity of the words, bedydd, bedd, and blwyddyn are examples of the confusion which often comes with the Welsh language.

For lists of useful words for family history research in Wales, study the following resources:

www.familysearch.org wiki article titled Welsh Gravestones has an extensive list of words which might be found on gravestones and which give family relationships

Welsh Family History – A Guide to Research by John Rowlands and others. This book is an excellent resource for learning the basics of family history in Wales

Google translate may be helpful when you want to translate a sentence or paragraph in Welsh but does not, always, catch every word.

In the next blog article on Wales genealogy records, we will look at some of the valuable online resources and try to untangle problems with Welsh names and places.

At Price Genealogy we have over forty years of experience helping people with the unique challenges of their Welsh genealogy. We are happy to help you break through your brick walls as well.