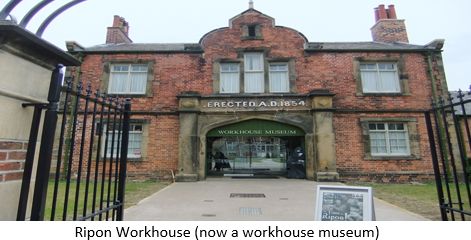 A very brief history of workhouses and the Poor Law:

Why was the workhouse so dreaded?

Why did people go to the workhouse?

I have long known that my third great grandparents, John Minting and his wife Margaret, had a son named Albert Alonzo, my second great grandfather, who had been baptized in 1817 at St. Marylebone, London. I had found a potential death index record in 1847 for John Minting, aged 80, in the St. Martin-in-the-Fields Registration District. At that time, this is all that I knew.

Much later, I learned about a new record collection at www.findmypast.com called the “London Poor Law Records, 1581-1899.” Searching for the Minting surname, I found the following document:

The document is tricky to read but it tells me that in 1822 John Minting, age 50, who was living at 4 Chapel Court, Long Acre, had received 25 pounds per year for four years from the parish. It tells me that he had been married to a woman named Margaret for 26 years and that he had married her at St. Martin-in-the-Fields. It also tells me that he has three children—Elizabeth, Albert Alonzo, age 4, and Sarah, age 3. This record told me that Albert had at least two living siblings in 1822.

I learned that John and Margaret Minting in 1822 had been married for about 26 years, giving an approximate marriage year of 1796 and the marriage location of St. Martin’s church. It took very little time to find the marriage record dated 18 October 1796 for John Minting and Margaret Barnerd in St. Martin-in-the-Fields. This family was not doing well financially, so I searched for the Minting name in records of the poor in London. Thanks to the “London, England, Workhouse Admission and Discharge Records, 1764-1930” on www.ancestry.com, John Minting’s exact death date on 19 January 1847 was found. It was recorded in the Westminster “Castle Street Workhouse Register, 1837-1848,” giving his age as 75, and underneath his name he was sadly listed as insane. At age 75, he may have been suffering from dementia. The death certificate for John Minting was ordered and it confirmed his death in the workhouse and it showed his occupation as carpenter. His cause of death was listed a little kindlier as “debility from age,” and he was age 80 here.

John Minting’s death in 1847 suggested that he would only be found in one census record. He was recorded in the 1841 census with a different wife, indicating that his first wife, Margaret, had died before 1841.

This example of workhouse research for the Minting family shows how workhouse records can aid in building the framework facts of a family history while also giving rich details to your family’s story.

There were more than 6,000 workhouses in England and Wales. Searching them can be a long process, and not all workhouse records survive.

What types of workhouse records can you expect to find to help with your family that spent time in the workhouse?

In the next workhouse blog we will examine the information you may find about your ancestors through workhouse records and how to access the records.

At Price Genealogy we have over forty years of experience helping people with the unique challenges of their family history, including research beyond baptisms, marriages and burials.

Have you found any information on your ancestors through workhouse records?  Let us know in a comment below!