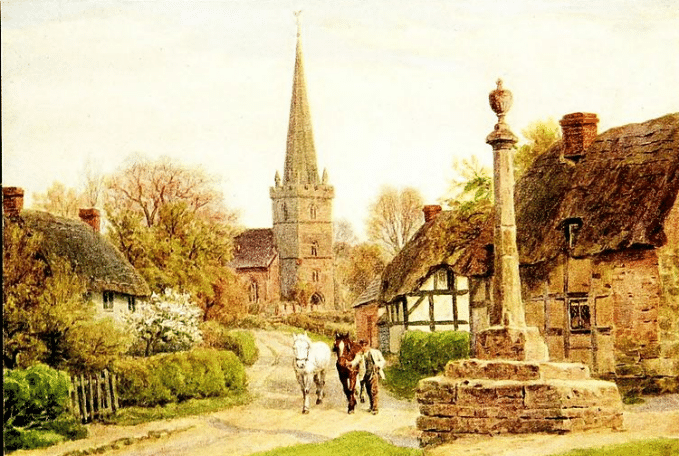 Censuses are crucial to English research, providing information about ancestors' residences at a particular time, ages, occupations, and family members. Thus, tracking ancestors before the first census was taken in 1841 may prove to be particularly elusive. Luckily, there are a variety of record types that include similar information to the censuses, and that can thus provide valuable English census substitutes. See Part 1 here.

Government censuses in England were in fact taken starting in 1801, though the 1801, 1811, 1821, and 1831 censuses were strictly statistical and were taken by the Overseers of the Poor and the clergy of a given parish. These censuses typically only record the name of the head of household, and then give numbers for the males and females living in the household (much like pre-1850 United States censuses). Because the household and individual schedules were never submitted to a central government entity, the original returns remain in dozens of local archives across the UK, and many of the censuses did not survive.

An on-going project led by Brigham Young University students aims to bring the numerous disparate pre-1841 census records into one searchable database. The online index can be searched at Early British Census by BYU. This set currently has census records from 120 parishes, documenting over 45,000 households, and that number is continually growing as student researchers contribute to the site.

The Old Poor Law Act of 1601 introduced rates for the maintenance of the poor. Community members were required to pay a certain amount in rates annually, which would then be used to feed, house, and clothe the poor in their parish. Poor law records reflect basically the entire population—you can expect to find your ancestor either paying rates, or receiving parish relief if they were too poor to pay rates. Information typically found in ratebooks can be the name of the occupier, the name of the owner (if different from the occupier), a description of their property, the name of the farm or street that the property is located at, the rent of the property, and how much money in rates should be given according to the property value. It should be noted that rate books typically only include the name of the head of the household. Because rates were kept annually, ratebooks can be a fantastic census substitute. Researchers can use them to track ancestors from year to year, and thus provide details on the movements and residences of them.

Rate books are typically included with the parish chest records of a parish, though in 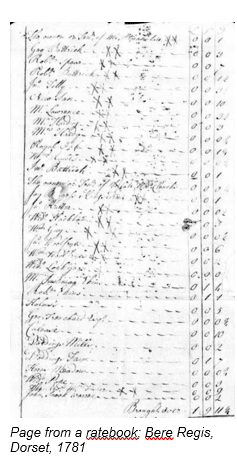 some instances they might be organized with the Churchwarden’s Accounts or the Vestry Minutes. Some online databases, such as Ancestry and FindMyPast, have digital image record sets for poor law online. Images of these records are often available on Family History Library microfilms. Abstracts of poor law records (usually without the images) are available for some localities on Online Parish Clerk sites and the National Archives Discovery Catalogue, and some are only available as physical copies in local archives in Great Britain. Consult the FamilySearch Wiki and Catalog, along with the National Archives’ Discovery Catalogue and Online Parish Clerk sites (when available) for both the county and parish that you are working in to identify where poor law records are available. Another useful resource in researching poor law records is BYU’s Kinship and Poverty project, an ongoing research project with the aim to gather data on poor relief and their kinship connections. So far, select parishes from Dorset, Northumberland, and Durham have been uploaded, but this project will continue to expand and add more parishes. This database can be accessed at BYU Kinship and Poverty.

Electoral registers contain lists of the names and addresses of registered voters. This 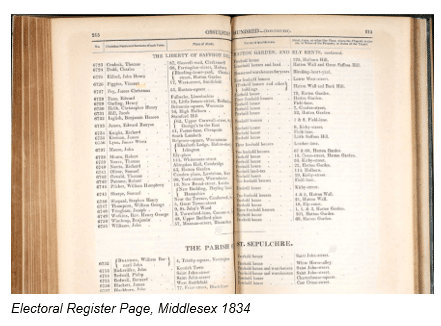 record type began in 1832, when Parliament passed the Reform Act requiring that electoral registers be kept, and have persisted as a key aspect of the British election process to this day. Electoral registers are typically available online for researchers from 1832 to the early to mid-twentieth century. Voting requirements changed over time, and thus those included on the registers have changed over time. Initially, only men who owned a certain amount of land were able to vote for their local representatives in Parliament, though this expanded to include all men who either held land, rented land, or engaged in a reputable occupation in 1867, to all men in 1884, and to include all men and women over the age of 21 in 1928. It also should be noted that registers were not published during the latter years of World War I (1916-1917) and were not published at all during World War II (1940-1944).

The London Metropolitan Archives has collaborated with Ancestry to digitize and index their electoral registers from 1832 to 1965. This collection covers registers for the city of London and the greater London area, and is available in Ancestry’s London, England, Electoral Registers, 1832-1965 collection. FindMyPast and the British Library have also collaborated to digitize and index the British Library’s collection of electoral registers. This set covers registers from 1832 to 1932, and spans the whole of England (with some gaps). This collection can be found in FindMyPast’s England & Wales Electoral Registers 1832-1932.

Good luck as you search for your pre-1841 English ancestors! The specialists at Price Genealogy are happy to assist you with your research.

Do you have any questions about English Census Substitutes?  Let us know in a comment below!