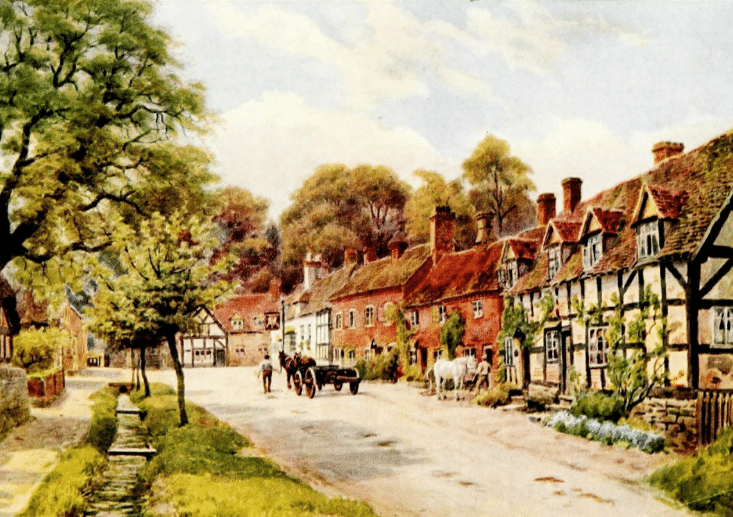 Censuses are crucial to English research, providing information about ancestors’ residences at a particular time, ages, occupations, and family members. Thus, tracking ancestors before the first census was taken in 1841 may prove to be particularly elusive. Luckily, there are a variety of record types that include similar information to the censuses, and that can thus provide a valuable census record substitute. Which is why today we are going to share everything you need to know about English Census Substitutes.

Because the tax records were often kept annually, movement patterns of ancestors can be tracked by examining consecutive yearly lists, thus providing an important census substitute. Land tax records exist for England and Wales starting in 1692, and span clear to 1950. These records include names of proprietors and renters, rental amount, the location of the property being taxed, and the year. These lists can help researchers to identify where an ancestor lived in a given year. Land tax records are kept on the county level in England and Wales. To find out the accessibility of land tax records for the locality you are researching in, check the FamilySearch Wiki page for information and contact the county record office in England for access. It also should be noted that land tax records for London and the London-greater area are accessible on Ancestry’s London, England, Land Tax Records, 1692-1932 collection, a set contributed by the London Metropolitan Archives. Images of many original assessments can also be seen through the FamilySearch Catalog by entering the name of the parish and looking under Taxation.

Between 1662 and 1689, a hearth tax was levied, charging two shillings per hearth in a given tenement, collected twice a year. Those that were exempt from the tax were those on parish poor relief and those who lived in dwellings that were valued at less than twenty shillings. See the FamilySearch Wiki page on the Hearth Tax to learn about where hearth tax records for your locality are available. The Window Tax was an evolution of the Hearth Tax, and taxed occupants according to how many windows their dwelling place had. This tax was in place from 1696 to 1851 (though in 1824 it shifted to only tax houses with over eight windows), and record images can be found on FHL microfilms and in The National Archives’ Discovery Catalogue by searching for your specific locality. 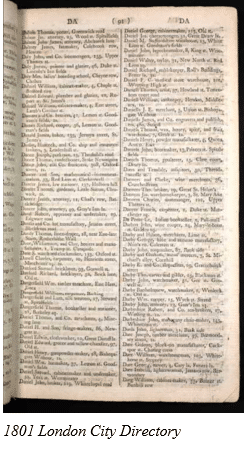 As English urban centers began to grow, directory lists of names and addresses of tradesmen were published. The first city directory was published in London in 1734, and other cities quickly followed. In 1781, a directory for the entire nation was kept. City directories rarely include names beyond the tradesman or head of the household—other members of the household are not mentioned. To effectively use city directories, researchers should know the occupation of the ancestor that they are tracing in order to ensure that they are tracking the right person. Tracing an ancestor through consecutive years in the city directories can provide a framework for further research, providing an idea of their movement patterns and residences. Record sets that include digitized images from collections of directories include Ancestry’s UK, City and County Directories, 1766-1956, Ancestry’s London, England, City Directories, 1736-1943, FindMyPast’s Britain, Directories & Almanacs, and Historical Directories of England & Wales, a record set organized by the University of Leicestershire.

The Great Fire of London in 1666 demolished the city, and prompted the development of fire insurance companies. Multiple insurance companies emerged, and by 1690 one in ten houses in London were insured. Realizing that it would be far cheaper to prevent fires than to reconstruct destroyed houses, companies placed signs or seals on the houses that they insured. Company fire brigades would be sent to put out fires for the houses that they insured, but would not put out fires for nearby buildings that they did not insure.

Fire policy registers normally include the following information: name, status, occupation and address of the policy holder; names, occupations and addresses of tenants; location, type, nature of the construction, and the value of property insured.

Especially when used in combination with other record types, fire insurance lists can provide information as to where and when your ancestor lived at a particular time. Because they include the address of your ancestor, you may be able to look up that address and see if the building is still there, thus providing interesting insights. It is important to note that insurance was only accessible to the wealthy and middle-classes. The poorer classes couldn’t afford fire insurance. Similarly, fire insurance companies only existed in large cities.

An expansive database of fire insurance policy registers is available on London Lives. This database is indexed, making it easy for the researcher to search for ancestors in the database. Fire insurance lists for cities outside of London can be found on the National Archives’ Discovery Catalogue.

The Militia Act of 1757 required that all men between eighteen and fifty years old be placed on ballot lists. From this list, men were randomly selected to serve in the militia. If a man so chose (and was able to afford it), he could hire a replacement in his stead. These ballot lists serve as a partial census substitute. They start in 1757 and can last all the way to the 1870s. Ballot lists include the name of the individual, the size of their family (though members are not named), and in some instances their occupation, along with where and when the list was recorded. These lists were taken annually, and can be used as a census substitute to identify where an ancestor lived, and also to track the family size, which can be useful in constructing family groups.

Militia records are available as digitized FHL microfilms, and can be accessed searching the FamilySearch catalog by county, though the microfilms themselves are organized by the hundred, a unit of local government and taxation between the village or parish and the county. The hundred for the parish you are working in can be identified by searching for the parish on FamilySearch’s Historical Maps.

This discussion of census substitutes for the time period before the 1841 census will be continued in part 2. Happy hunting as you search for your pre-1841 English ancestors! Price Genealogy’s England specialists are here to assist you too.

Do you have any other questions about English Census substitutes?  Let us know in a comment below!