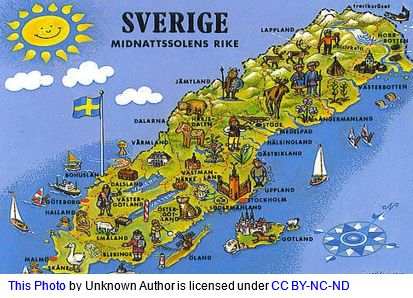 At Price Genealogy our research team strives to be as knowledgeable as possible about available finding aids and record collections so that we can accomplish our client’s goals.  When people think of researching their genealogy, digging through the maps section of an archive is not usually the first thing that comes to mind. But maps help place your ancestors in their geo-historical context. Many maps come with supporting documents which help us understand them. The Swedish people have a rich history, and have gone to great lengths to preserve their old documents. So today we're talking about Swedish maps and how they can help aid you in your genealogy work.

Some of you may have read our previous posts on Swedish research: Finding Your Swedish Roots [Online] and The Tale of Two Lars Nilssons, and most recently, Swedish Genealogy Using Newspaper Collections. You will find our Scandinavian Genealogy resources page loaded with helpful links to parish and probate records, and so much more. The map collections of the Swedish National Archives system contain excellent examples of often underutilized resources of great value. Historical Swedish maps are found on several websites. Three of these are discussed in this article. On the Swedish National Archives website are two of them—geometriska (Sweden’s oldest large-scale maps) and the war archives map collections, as well as the Swedish government land surveying/mapping authority Lantmäteriet.

An article by itself could be written on how to navigate and search these collections. If you can read Swedish, detailed help guides are on each of the websites. The professionals at Price Genealogy can also search these for you.

Here are a couple examples of how the map collection may be helpful:

Anders first appeared on the mantal taxation lists as a head of household in 1672 at a farm later identified starting in 1697 as Hemmesdynge 8. In this early period, paying attention to the exact farm number where a person lived is critical to distinguish between your ancestors and others with similar names. Since the first entry of Anders Truedsson appears prior the calculated births of his first known children, and his birth was some distance from Hemmesdynge, it appears that his move to Hemmesdynge may have been due to his marriage with Ingrid Nilsdotter. Their marriage probably occurred in Hemmesdynge, since couples typically wedded in the bride’s home parish. She very well could be a native of this parish, so it makes sense to look for a suitable birth family for her.

The taxation records were searched around the time she would have been 15 years old, so about 1663 or 1664, which was the earliest age she would be recorded as a taxable person at this time. Two households identified in Hemmesdynge parish were headed by men named Nils, and each had at least one taxable daughter recorded. These men were Nils Jeppsson and Nils Lauritsson/Larsson.

In an online database, a 1668 probate was found in the regional city of Ystad for Nils Jepsson of Hemmesdynge as a son named in an estate inventory from yet another locality.  Estate inventories were not mandatory in Sweden until 1734, so they are scare before then. Nils Jepsson was one of two possible fathers of Ingrid Nilsdotter. Careful analysis of the taxation records and a 1767 map of the area helped determine Ingrid’s likely father.

All available mantal taxation records from 1658 to 1675 were examined for both men’s households for clues. In 1672, Nils Larsson and Anders Truedsson were recorded right next to each other, with only one other named head of household separating them after that. This cluster of names was followed forward to the time when the farms were formally numbered on the taxation and parish catechism records. Nils Larsson was succeeded as head of household by his son Per Nilsson on a farm referred to as Hemmesdynge 10.

A 1767 map of Hemmesdynge revealed that the farms of Hemmesdynge did not consist of one contiguous plot of land, but several smaller parcels of land scattered throughout the parish, which was very common in Skåne providence before the great land redistribution reforms of the 1770s. However, there is a spot in the parish where farms 8 and 10 share two common boundary lines.

Since farms 8 and 10 bordered each other, it is likely that the mantal tax commissioner visited these farms one after the other, rather than went out of his way to visit farm 9, which was a little further away. (In some years it looks like the tax commissioner went from 8 to 9 to 10.) See the map below: 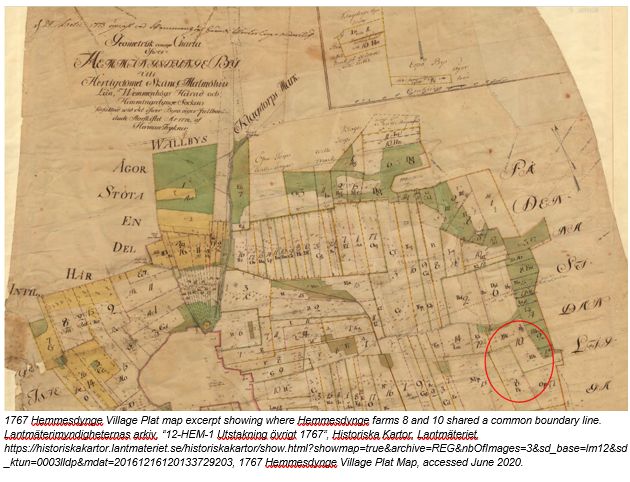 The other candidate, Nils Jepsson, who was succeeded by his likely son, Jeppe Nilsson, was always several more spaces away from where Nils Lauritsson or Larsson and Anders Truedsson appeared on the mantal taxation lists. The evidence from these surviving mantal taxation records from the 1670s and 1700s helps build a case that Ingrid Nilsdotter’s father may have been Nils Larsson. Population records place Anders Truedsson right next to Nils Larsson in Hemmesdynge about the time he would have married Ingrid Nilsdotter, which was before the parish register began. Anders continued living near Nils Larsson, so it is reasonable to think that Anders was Nils’ son-in-law.

This does not exhaust all evidence though. Court documents after 1674 could shed more light on this family, but these records are not indexed and take much more time to study. They do however sometimes allow the scattered fragments of evidence to be connected, thereby bringing together family groups. But, this example also shows how old maps can also provide visual evidence to suggest relationships.

As previously mentioned, another important item in the map collections is the documentation that accompanies the maps themselves. This documentation sometimes provides exact references or leads to relevant records in the court archives. It can make it easier to find references in court records, which otherwise can take a lot of time if you don’t know what volume to look in. An example comes from Röstorp, a farming village in Kristdala parish in Kalmar county, Sweden.

In 1755 and 1758, two groups of farm owners of Hägerum Mill farm and of Röstorp had a dispute about the boundaries of their respective properties. Land disputes can be found in the general court record books of a given härad (district). However, these documents from the map collection are much less time consuming to locate and they provide useful information needed for further research. 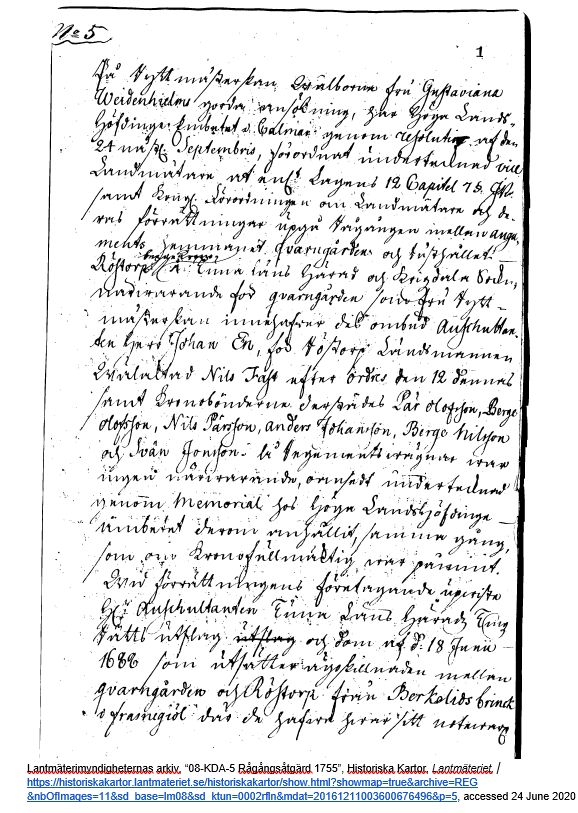 As a summary, farmers Pär Olofsson, Berge Olofsson, Nils Pärsson, Anders Johansson, Berge Nilsson, and Svän Jonsson all had a legal interest in the Röstorp farmlands. Through a power of attorney, they were represented by a lawyer who cited a judgment of the district court, dated the 18 June 1688, which set out the division between the mill farm and Röstorp from Berkolids Bruk. If one did not have this reference to pre-1734 property ownership, it could take dozens of hours going page by page through the court judgment books (dömboker) to find the case.

Sometimes one can find copies of land leases and purchase contracts that are available nowhere else, including in the court archives. You never know until you look; you will maybe get lucky and find something that could break down a stubborn brick wall, or may help you better understand your forebears’ lives!

Further reading (Articles are in Swedish):

If you are interested in the resources discussed above, but would like some help, now may be the time to give Price Genealogy a try. We have several research packages to fit a variety of our client’s needs. We have over 40 years of experience helping people discover their ancestors. Whether you have Swedish ancestry or not, we have the right people to break through your ancestral lines. Why struggle for endless hours when Price Genealogy already knows how to accomplish your goals? Email or call us today—you won’t regret it. (801) 531-0920

Have you ever used Swedish maps in your genealogy work?  Let us know in a comment below!