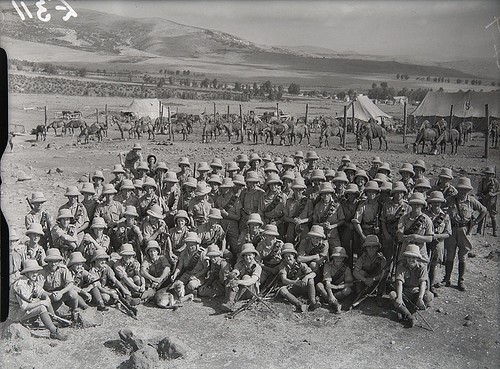 Not long ago, everyone’s father or grandpa had been involved in World War 2. Now that it’s the 2020s, as WWII veterans are moving on, their stories need to be remembered. This is easy to do if your WWII veteran relative is still alive and willing to open up about their military experience. Many people do not have it this easy and need to search for records to learn their veteran relative’s war story.

Just like with any other genealogical research, it is helpful to know the historical context when researching your ancestor. Even though WWII began September 1939, the U.S. did not enter until December 1941, right after the Pearl Harbor attack. Many U.S. citizens joined the war prior to the U.S. officially entering. This includes around 10,000 men from the U.S. who served with the British or Canadian forces. If this includes your ancestor, you will need to search those country’s military records to learn about their experiences. Additionally, the U.S. began a peacetime draft in October 1940 with the Selective Service Act. Consequently, there are U.S. draft registrations as early as that date.

U.S. military branches include the Coast Guard, Merchant Marines, Marine Corps, Army Air Force, Navy, and the Army. The U.S. Army was the largest branch, larger than all the others combined. Each branch had their own sets of regiments and companies, or military units. Knowing which unit your ancestor served in is helpful to finding their military records.

When researching a WWII veteran, it is helpful to know when and where they joined the military, which unit they served in, what their job was, if they served overseas, if they were in any battles, if they received any metals, and when they left the military. A veteran’s discharge papers (also known as separation papers or DD-214) contain all this information.

By knowing what unit an ancestor was in, or what battles they were in, it is possible to learn that ancestor’s war story by learning the unit history and about the battles. Unit and battle histories can be found through “Morning Reports” and “After Action Reports.” There are published histories for some units. Any journals and letters written by anyone in your ancestor’s unit, even if it’s not written by your ancestor, can also give details on what your ancestor experienced in the war. Rewards and metals that veterans received also tell a story. By learning what was required to obtain a certain reward, you can gain insight into what your ancestor experienced.

Note that the discharge papers list the unit your ancestor was with at the time of separation. Some soldiers were transferred between units, so it may be necessary to look up multiple units.

Below is the DD-214 of Charles Lorain Carpenter, who retired from the military in 1956 after a thirty-year career. He was appointed as captain on 3 August 1943 during WWII. Charles was a resident of Pennsylvania, and enlisted in Annapolis, Maryland on 3 June 1926. He served in the Fourth Naval District in Philadelphia, Pennsylvania. His discharge papers list awards he received for service, mention wounds he received in battle, and his most significant duty assignment. All of these give clues to where a researcher can look to learn more details of his military career. In this case, the wounds section names a boat and a battle, which a researcher can look up. 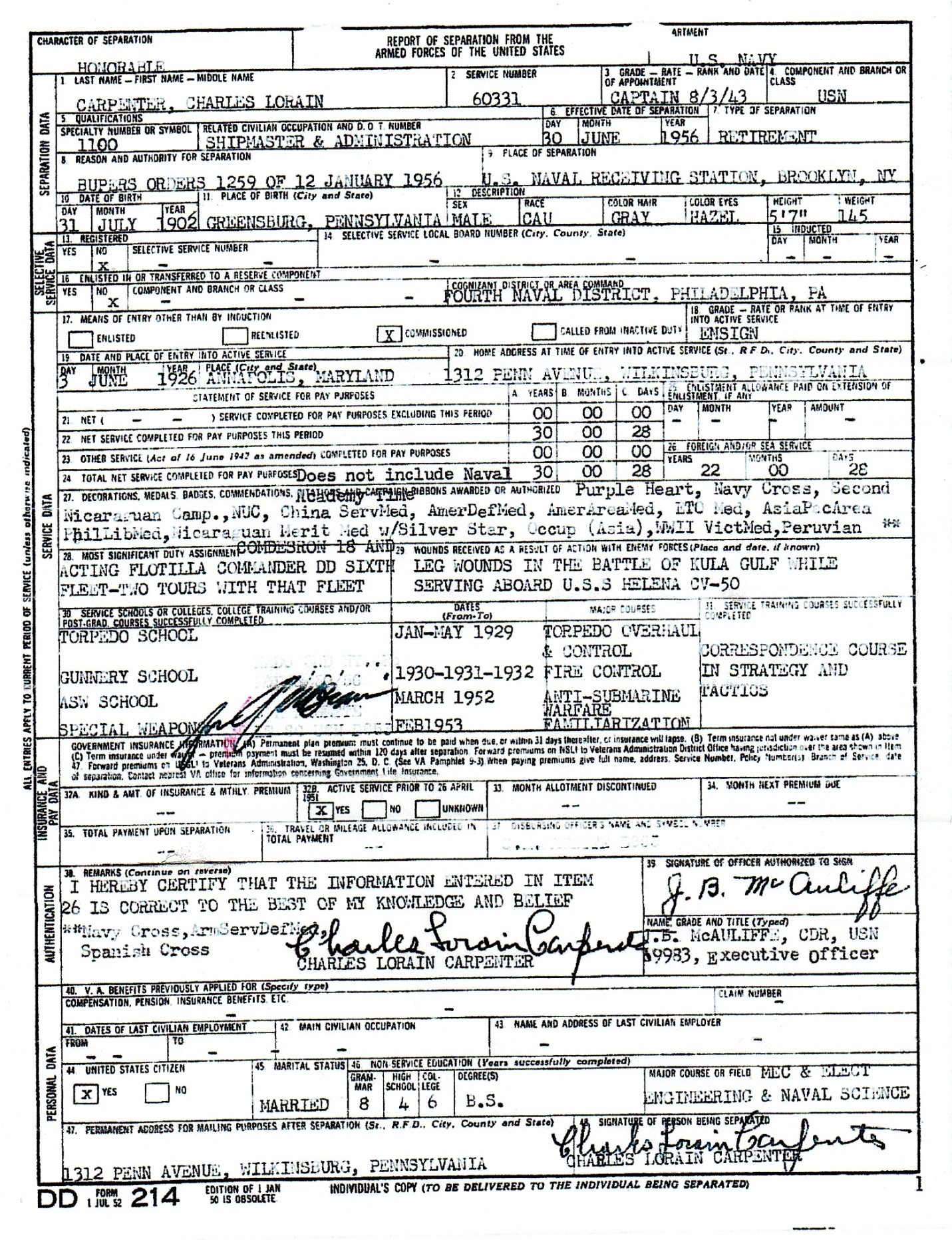 As mentioned previously, the DD-214 is a good place to start researching a WWII veteran ancestor. This is a form given to someone upon leaving the military, so it is only available for an ancestor who returned from WWII alive. For an ancestor that died in WWII, the record to obtain is the Individual Deceased Personnel Files.

The DD-214 can be hard to obtain. The first place to check is to see if the veteran or their immediate family has a copy of it. The next place to check is the National Personnel Records Center (NPRC). However, a large percentage of records were lost in a fire in the 1970s. A request can be made to the NPRC. They will send what records they have, or they will send a statement indicating that the records were burned.

To obtain an Individual Deceased Personnel File, you have to know what unit your ancestor served in and write to that unit. The information in these files varies from unit to unit; some contain minimal information while some contain detailed reports of the action the ancestor died in. The tricky part of this can be finding the current address of your ancestor’s unit because some of the units often change addresses.

Additionally, you can search for obituaries and newspaper articles published about the soldier’s death. The obituary or newspaper article may state his unit and other details about his service. Some communities’ newspapers published lists of soldiers who died in war.

Whether your veteran ancestor died in WWII or long after, burial records are a good source of information. For those who died in war and are buried overseas, look for information in the American Battle Monuments Commission. Also check out the Nationwide Gravesite Locator and Find-A-Grave.

Other places to learn of a military ancestor include photos of the ancestor in uniform, letters they wrote, and family lore. Photos of the veteran in uniform would include any decorations they received, which can give hints to which branch or unit of the military they served in. The return address of letters they wrote home would include unit information. Family lore should be taken with a grain of salt because it’s not always accurate; however, it’s a good starting place for research.

The following is a list of databases for WWII military research:

Whatever your WWII veteran’s story is, it deserves to be remembered. If you need help learning their story, Price Genealogy can help.

Have you done any World War 2 research?  Let us know in a comment below!